Understanding the information lost during PCA on classification

I am testing a self-implemented PCA on a set of image data ($N \times d$, $N = 10000$ sample size, $d = 28 \times 28$ feature size). When I observed the classification accuracy, I found the accuracy increase somehow with the increased target reduced dimension $k$ and decresed from then on. See the image below: 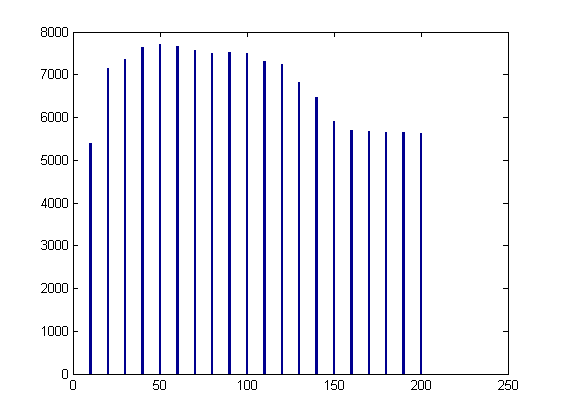 The maximum accuracy corresponded to $PoV = 89\%$.

I also tried reducing the data to $k = d$, the accuracy was still much lower than the maximum showed in the graph.

Is these what is expected for PCA? Or my classifier is not working?

How can I interpret the "information lost" for different $k$ in PCA?

ps: I even tried the "princomp' built-in function, it yield similar result.

Sorry for not stating clearly. For both training set itself and a separate test set as test set, I got similar result as in the graph.

If you are estimating classification accuracy by looking at a validation or test set separate from your training set, then this is precisely what you would expect to happen.

Initially, as you increase the number of principal components, you incorporate real information and your classification improves.

If you take too many principal components then you get overfitting, treating noise in the training set as useful information, and producing conclusions that not only fail to generalise to other data outside your training set but which are actually misleading.

I assume that you present test data of a "tuning" test set, which is independent of the principle component analysis (PCA) and classifier training data (and independent of the test data for measuring the performance of the final classifier), such as the results of an inner-loop of double cross- or out-of-bootstrap-validation.

In that case, you probably observe a textbook-version of accuracy vs. complexity of the classifier (see e.g. The Elements of Statistical Learning, fig. 2.11 p. 38 in the version free for download:

So far, this is my guess at what is going on. But you can actually measure whether my guess is right:

You can distinguish these two situations by comparing training error (goodness-of-fit) and independent test error: in the first case, you see a lack of fit and a low generalization performance. In the second case, you see excellent fit, but nevertheless low generalization performance.
You can also directly measure model stability: If you resample your training data, you also see large variations between models trained on slightly different data sets (resampling exchanges some cases against others): the models are unstable. Instead of directly comparing the models, you can also compare predictions of the different "surrogate" models (built on different resampled training sets) for the same test cases.

When you do PCA, you get components that are sorted with decreasing variance. Doing this as a pre-processing step before classification is lead by the assumption that the relevant differences between the classes are the largest variations in the data set, whereas the higher componentents carry only noise. In that scenario, if the right number of PCs is chosen, only noise is cut away while the information (= variance relevant for the classification) is preserved.

So the drop for higher numbers of PCs is not due to lost information but to too high classifier complexity. Your data set probably does not carry enough information to train a stable classifier with the hight complexity corresponding to the high number of PCs.

Not the answer you're looking for? Browse other questions tagged bayesian classification pca or ask your own question.

1
Measuring what's 'lost' in PCA dimensionality reduction?
3
Using PCA for detecting similar regions in an image
2
PCA using princomp in MATLAB
1
The size of my reduced data set is greater than the original
1
PCA not helping in very high dimensional regression using KNN
4
How to reduce the dimensionality of a similarity matrix (of categorical co-occurence counts)?
1
Does it make sense to implement a PCA after an Autoencoder processing?