Good non-informative priors for estimating the parameters of a Gaussian with MCMC (using PyMC)?

Since the samples $\hat{\mu}$ are also Gaussian though, it seems like I should be able to precisely estimate their mean and variance by sampling them directly using priors like these:

Is there a better set of priors/hyperpriors that would be more suitable to sampling in cases like this? I suspect that using uniform, independent hyperpriors might be the issue, but I'm not sure.

Gelman has good advice for setting priors for variance parameters in Bayesian models.

There is too much structure in this model for the data you are trying to fit. In particular, it is not clear why you are modeling mu, rather than just putting a prior on it. The way you have it set up, you are claiming that mu is sampled from another normal with unknown parameters, which is not supported by your data.

Also, the standard deviation (not the variance) should be modeled as a uniform for it to be diffuse.

The following code produces good estimates of the true parameters of the model: 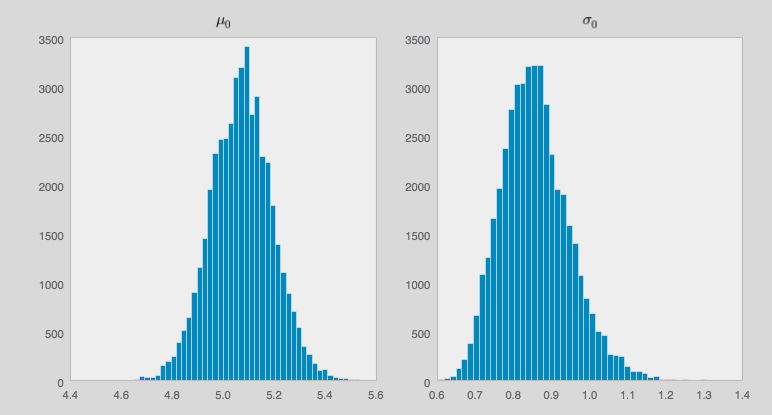 Based on your statement that "the samples $\hat \mu$ are also Gaussian", I think what you are saying is that samples from the posterior of $\mu$ appear normally distributed, and this inspires you to think about the bias (mean) and variance of these draws as if they were estimates of $\mu$. Certainly we do this kind of analysis of estimation algorithms in statistical signal processing.

However, I think the mistake in your thinking happens when you treat individual draws from the posterior, what you call $\hat \mu$, as actual estimates of $\mu$, when in fact these draws, as a collective, define the posterior distribution itself (as much as draws from a distribution can be said to "define" it).

Here's how I think you'd get 5 for a sample mean and 0.2 as a sample standard deviation (you said variance but I think you mean standard deviation). First, construct an explicit estimator for the mean $\mu$ given data $\mathbb x$, e.g., obtain 50'000 MCMC samples and average them. (Note how this estimator collapses the entire MCMC run into a single scalar estimate.) Then apply this estimator on repeated Monte Carlo draws of $\mathbb x$, i.e., generate a bunch of new data and each time apply this estimator. You should find the sample mean of these Monte Carlo estimates to be close to 5 and their sample deviation to be small.

I would not expect any inferences indicating a mean of 5 and standard deviation of 0.2 by modeling the mean $\mu$ random variable itself as a draw from another parent distribution. As @fonnesbeck explains, the structure of your data can't inform this higher-level hierarchy.

In summary, the draws you see from the posterior of $\hat \mu$ are different than the random variable $\mu$ itself.

Not the answer you're looking for? Browse other questions tagged bayesian mcmc pymc or ask your own question.