One of the first toy problems I wanted to apply PyMC to is nonparametric clustering: given some data, model it as a Gaussian mixture, and learn the number of clusters and each cluster's mean and covariance. Most of what I know about this method comes from video lectures by Michael Jordan and Yee Whye Teh, circa 2007 (before sparsity became the rage), and the last couple of days' reading Dr Fonnesbeck's and E. Chen's tutorials [fn1], [fn2]. But the problem is well-studied and has some reliable implementations [fn3].

In this toy problem, I generate ten draws from a one-dimensional Gaussian $\mathcal{N}(\mu=0, \sigma=1)$ and forty draws from $\mathcal{N}(\mu=4, \sigma=2)$. As you can see below, I didn't shuffle the draws, to make it easy to tell which samples came from which mixture component. 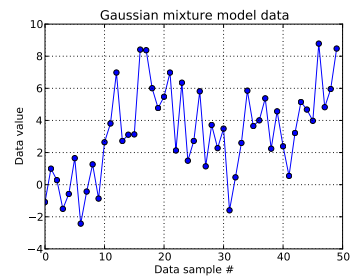 Expanding the Dirichlet process infrastructure, each $z_i$ cluster ID is a draw from a categorical random variable, whose probability mass function is given by the stick-breaking construct: $z_i \sim Categorical(p)$ with $p \sim Stick(\alpha)$ for a concentration parameter $\alpha$. Stick-breaking constructs the $N_{DP}$-long vector $p$, which must sum to 1, by first obtaining $N_{DP}$ i.i.d. Beta-distributed draws that depend on $\alpha$, see [fn1]. And since I'd like to the data to inform my ignorance of $\alpha$, I follow [fn1] and assume $\alpha \sim Uniform(0.3, 100)$.

In summary, my model is:

Here's the graphical model: the names are variable names, see the code section below. 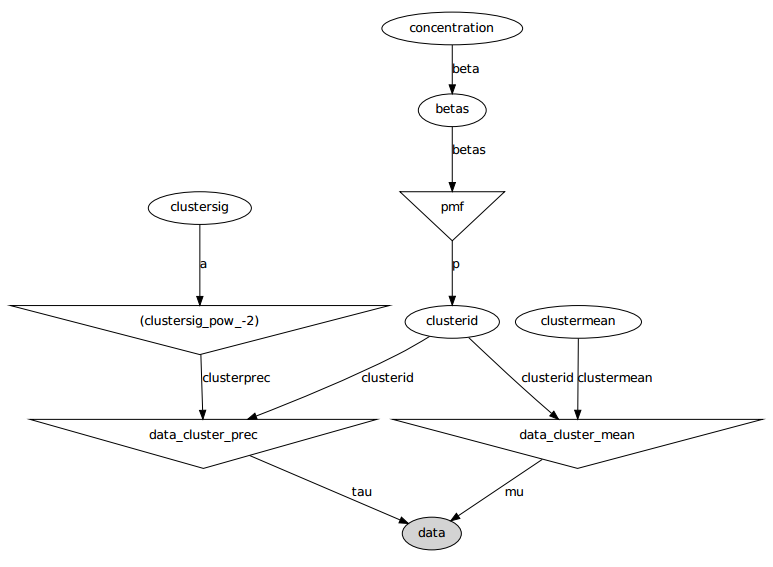 Despite several tweaks and failed fixes, the parameters learned are not at all similar to the true values that generated the data.

Currently, I'm initializing most of the random variables to fixed values. The mean and standard deviation variables are initialized to their expected values (i.e., 0 for the normal ones, the middle of their support for the uniform ones). I initialize all $z_i$ cluster IDs to 0. And I initialize the concentration parameter $\alpha=5$. 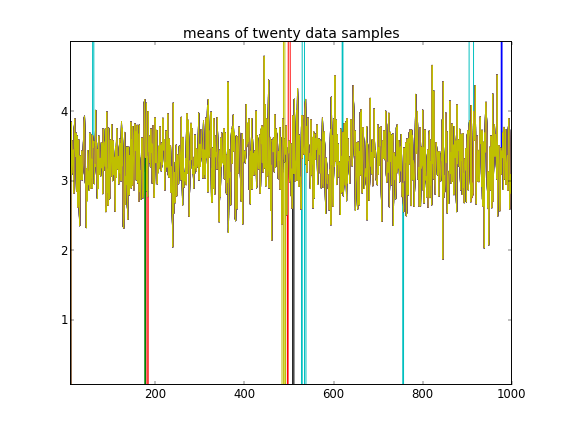 Recalling that the first ten data samples were from one mode and the rest were from the other, the above result clearly fails to capture that.

If I allow random initialization of the cluster IDs, then I obtain more than one cluster but the cluster means all wander around the same 3.5 level: 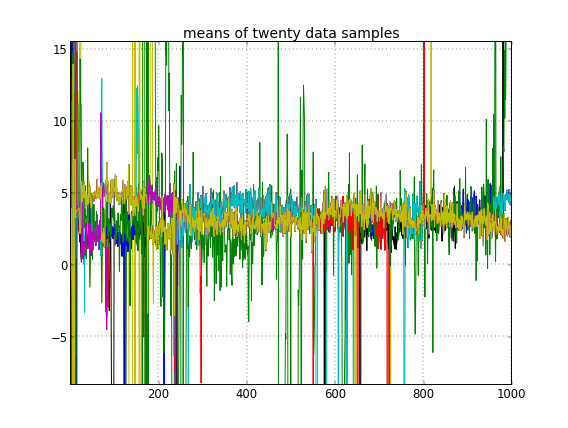 This suggests to me that it's the usual problem with MCMC, that it can't reach another mode of the posterior from the one it's at: recall that these different results happen after just changing the initialization of the cluster IDs $z_i$, not their priors or anything else.

Am I making any modeling mistakes? Similar question: https://stackoverflow.com/q/19114790/500207 wants to use a Dirichlet distribution and fit a 3-element Gaussian mixture and is running into somewhat similar problems. Should I consider setting up a fully conjugate model and using Gibbs sampling for this kind of clustering? (I implemented a Gibbs sampler for the parametric Dirichlet distribution case, except using a fixed concentration $\alpha$, back in the day and it worked well, so expect PyMC to be able to solve at least that problem handily.)

I'm not sure if anyone is looking at this question any more but I put your question in to rjags to test Tom's Gibbs sampling suggestion while incorporating insight from Guy about the flat prior for standard deviation.

This toy problem might be difficult because 10 and even 40 data points are not enough to estimate variance without an informative prior. The current prior σzi∼Uniform(0,100) is not informative. This might explain why nearly all draws of μzi are the expected mean of the two distributions. If it does not alter your question too much I will use 100 and 400 data points respectively.

I also did not use the stick breaking process directly in my code. The wikipedia page for the dirichlet process made me think p ~ Dir(a/k) would be ok.

Finally it is only a semi-parametric implementation since it still takes a number of clusters k. I don't know how to make an infinite mixture model in rjags. 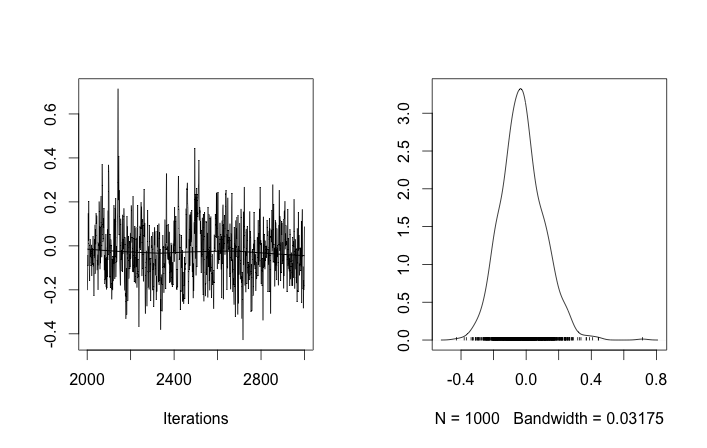 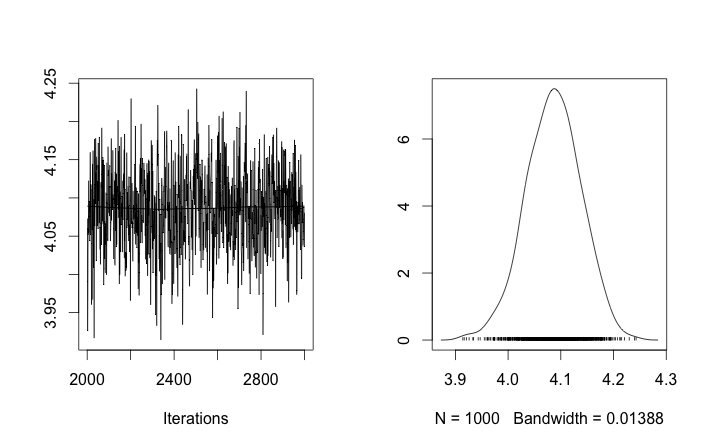 The poor mixing that you are seeing is most likely because of the way that PyMC draws samples. As explained in section 5.8.1 of the PyMC documentation, all elements of an array variable are updated together. In your case, that means it will try to update the entire clustermean array in one step, and similarly for clusterid. PyMC doesn't do Gibbs sampling; it does Metropolis where the proposal is chosen by some simple heuristics. This makes it unlikely to propose a good value for an entire array.

Not the answer you're looking for? Browse other questions tagged bayesian clustering python pymc nonparametric-bayes or ask your own question.

2
Good non-informative priors for estimating the parameters of a Gaussian with MCMC (using PyMC)?