I work in a company that gathers work environment surveys. When a survey is done we create reports that are handed out to the managers in the company to show where they need to focus their efforts and such.

In these reports we show a comparison of the variance of the calculated group compared to the variance of a reference population. We "normalize" this score on a 0-100 scale. (The in-code calculation gives another scale from -inf to +inf, but for simplicity we say that 0 is 50, and just chop off everything over 100 and under 0.) Our biggest problem is that our customers gets very conscious of the actual number. Even though we try to tell them that a high/low number isn't necessarily bad, it just shows how your groups variance compares to the reference populations variance.

Does anyone have any suggestions on how this could be achieved?

(Disclaimer: I am not a statistician, I'm a developer ;). I had one class of Statistics in my higher education, and that is over 5 years ago. So both the terms I use and my explanations could be totally meaningless.)

If the main concern is "that our customers gets very conscious of the actual number. Even though we try to tell them that a high/low number isn't necessarily bad", then I think you should formally address them by plotting the confidence intervals. Variance is a bad choice because its unit is the square of whatever you're measuring with and they are much bigger and can be potentially very misleading. Standard deviation is a better approach but that does not answer your customers' concern because just by SD itself one cannot tell if the point estimates are really different from the reference mean.

Some kind of plot modified based on a forest plot would be a better candidate. It's compact and easy to integrate with text fields (where you can show the summary statistics.) And what's more, it answers your client question head on. If they are worried that 3.5 is so much lower than 4.6, then show them statistically they are not different. (Or maybe your clients are right.)

And somewhat contrary to what you propose to do (eliminating numeric output altogether), I'd perhaps try to enrich the graph so that it shows more data. Devices like panel histogram or violin plot (see below) allows you to show the distribution of the actual data, which perhaps will give a strong visual cue that the data do spread and it's not about just one point. 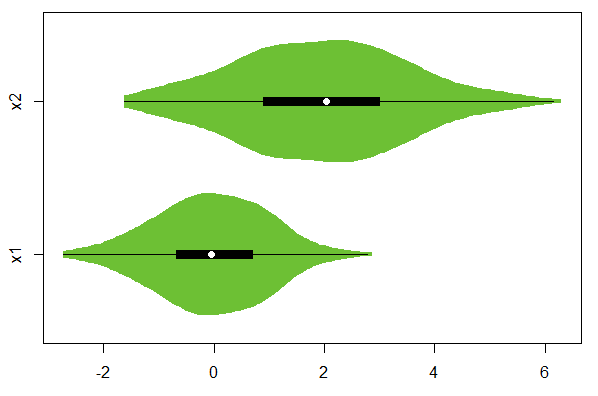 Also, I'd recommend evaluating your score distribution for skewness or other deviation from normal distribution, and see if augmenting with some non-parametric plot like box plot would be a good idea.

Side comment: I feel that your trimming criterion is very rigid, but I wouldn't question your familiarity with the scale. Anyhow, if such a trimming scheme is being used, I feel you're also obligated to report how many of the people are trimmed. It's because the variation you're using to convince them that things are not that different can be potentially altered by how you define the trimming threshold. It'd be awkward if they find out later.

One of the most usual ways to show a distribution is to plot its probability density function or its cumulative density function (most often referred to as PDF and CDF respectively). The below plot shows a reference distribution that is normally distributed with a mean of 40 and a standard deviation of 15. A value of interest, at 80, is superimposed as an unmistakable large red dot. The grey line on the left plot shows the estimate of the CDF from the reference distribution, and the PDF in the right plot.

This type of graph is amenable to not as well defined reference distributions as well. For example you could plot the smoothed kernel density estimate of the PDF (or CDF) based on the prior reference values and superimpose the current value of interest just the same. From these plots one can either estimate the probability of getting a value above or below the current value of interest. The CDF it is read directly off the chart, PDF one has to make that estimate based on the area to the left or right of the value of interest. Another alternative (which Penguin shows) is to reflect the PDF and show its area as a violin plot. This provides some more visual gurth for the area in the tail of the distribution. Here the value of interest is marked by a black horizontal line, and the area above the value is colored red. 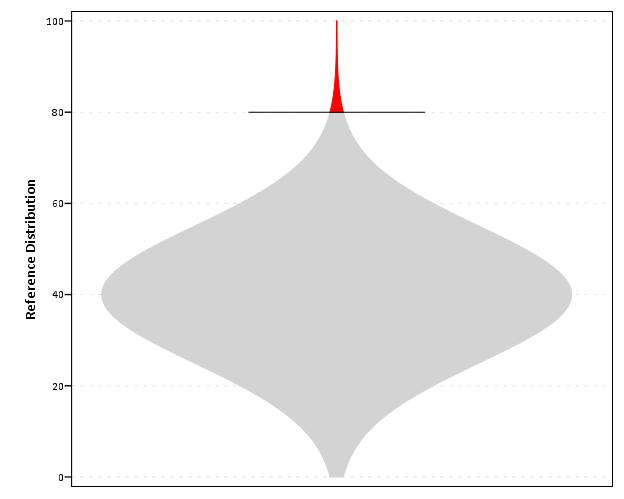 Another popular alternative to showing distributions are box plots (or error bar charts). The error bars in the left chart covers the middle 80% of the reference distribution, and the box plot on the right plots the interquartile range within the grey bar and outside of the whiskers are typically considered to be a robust estimate of outliers. 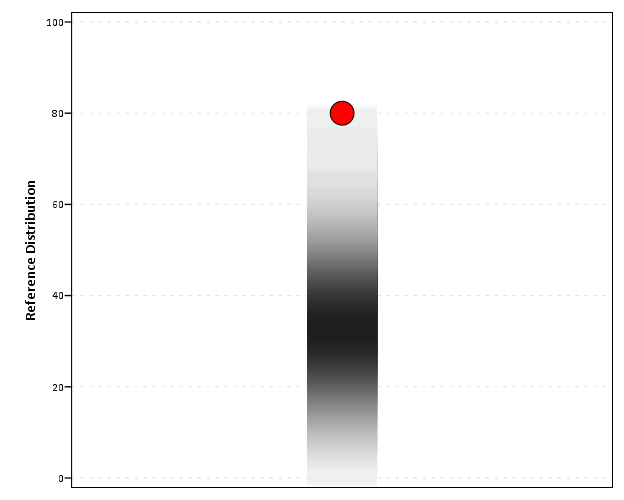 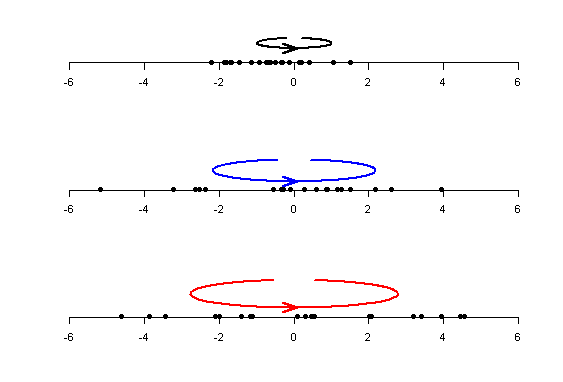 The square root of variance is on the same scale as your data. For a normal distribution, this is known as the standard deviation.

This is known as "standardization", or the $z$-score.

I would suggest using bar plots with pairs of bars for the target group next to the reference group, and on top of each bar plot confidence intervals (I's) centered around the top of the bar with length of $2\sigma$, where $\sigma$ is the standard deviation. See example from Wikipedia's Error Bar article: 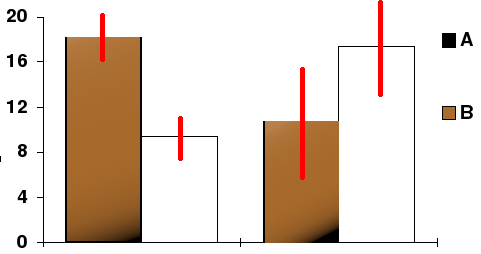 Not the answer you're looking for? Browse other questions tagged data-visualization variance or ask your own question.

15
Alternative graphics to "handle bar" plots
15
What is the name of this plot using vertical lines to show a distribution?
4
What am I really calculating here?

4
What am I really calculating here?
0
Accounting For Increase In Volume
7
How to standardize proportions from US Census data
43
Variance of $K$-fold cross-validation estimates as $f(K)$: what is the role of "stability"?
1
Perfomance Evaluation of Servers
1
Why do we need F test of two variances if we have the Ansari-Bradley test?
1
How to interpret differences in explained variance (both r2m and r2c) among models that are not nested?
1
How to measure good or bad luck in roulette