I'm writing a series of blog posts on the basics of machine learning, just for fun, mostly to validate my understanding of Andrew Ng's class. As I'm currently studying generalized linear models (GLMs), my method so far is to generate a small 2D dataset for each regression algo, and apply batch gradient descent on the corresponding error function, to train the parameters. I use Python tools to try to illustrate and interpret the results in an intuitive way.

I've been able to build my logistic regression post in such a way as to emphasize the geometric interpretation of the trained $\theta$ parameters, i.e. show that they correspond to the parameters of the equation of the 2D decision boundary in the general form, $ax + by + c = 0$:

Next I've been trying to do the same with softmax regression (work in progress, not yet posted):

and everything seems fine (i.e. the negative log-likelihood is getting minimized, as well as the classification error, as my notebook graphs show) but I run into difficulties when I try to interpret the $\theta$ parameters in a geometric way, as I did with logistic regression: the resulting decision lines don't make sense (as the last graph of my notebook shows). I have many doubts: does it first make sense to try to interpret those parameters in that way? Or perhaps there's a bug in my training algo? Or something else?

If I train a logistic regression model on 2D data, the resulting three components of $\theta$ can be interpreted as the parameters of the decision line equation, in general form $(\theta_0x + \theta_1y + \theta_3 = 0)$, which might yield, when plotted, something like 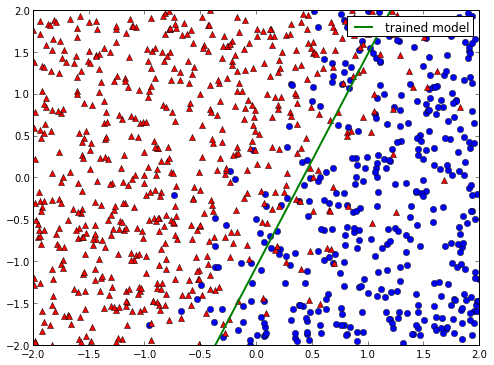 If I extend this reasoning to the trained parameters of a 3-class softmax regression, the 9 components should correspond to 3 general form equations. However, when I plot them, as below, they don't seem like decision lines, and I'm wondering if it simply makes sense to interpret them geometrically like that. And if not, is there another intuitive way they can be interpreted? 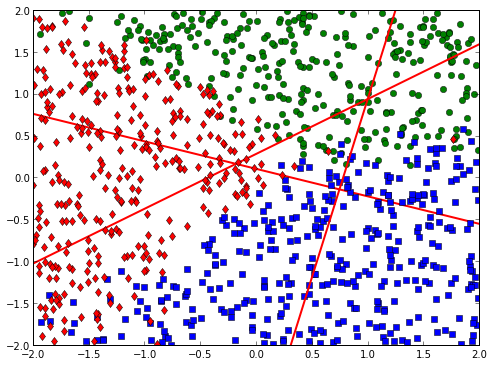 Browse other questions tagged regression logistic generalized-linear-model interpretation or ask your own question.