As for qualitative differences, the lognormal and gamma are, as you say, quite similar.

Indeed, in practice they're often used to model the same phenomena (some people will use a gamma where others use a lognormal). They are both, for example, constant-coefficient-of-variation models (the CV for the lognormal is $\sqrt{e^{\sigma^2} -1}$, for the gamma it's $1/\sqrt \alpha$).

You might find it instructive to look at the density of their logs, which often shows a very clear difference.

The log of a lognormal random variable is ... normal. It's symmetric.

The log of a gamma random variable is left-skew. Depending on the value of the shape parameter, it may be quite skew or nearly symmetric. 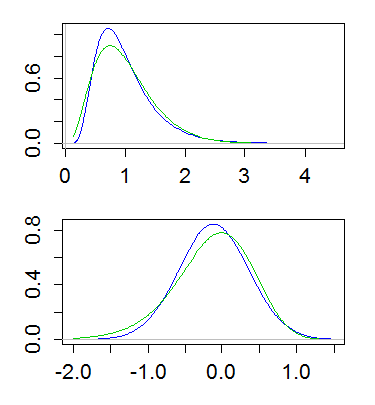 (Plotting the log of the density of the logs is also useful. That is, taking a log-scale on the y-axis above)

To answer your question about physical processes that generate these distributions: The lognormal distribution arises when the logarithm of X is normally distributed, for example, if X is the product of very many small factors. If X is gamma distributed, it is the sum of many exponentially-distributed variates. For example, the waiting time for many events of a Poisson process.

Not the answer you're looking for? Browse other questions tagged density-function gamma-distribution lognormal-distribution or ask your own question.

52
Which has the heavier tail, lognormal or gamma?
16
Skewness of the logarithm of a gamma random variable
2
What distribution does my data has?
3
What is the intuition behind assuming a variable satisfies a distribution?
1
What is the difference between lm(log(y) ~ x) and glm(y ~ x, family = gaussian(link = "log"))?