I have a question about how to tell two different mixed effects models apart. In the simple case both involve fitting a model with a random group effect and a covariate. I fit the model with lme4 in R. Here is a visualization of the two different scenarios. 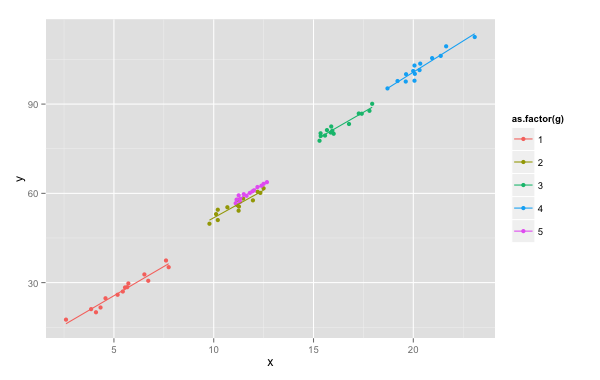 Then I can generate and fit the other scenario with similar code: 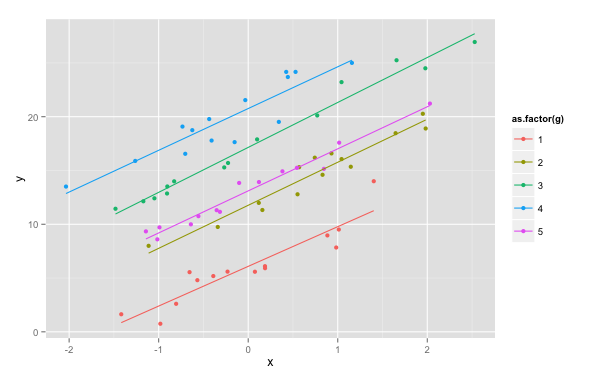 My central question is how do I tell these two models apart? Am I incorrectly fitting the first one, and I need an extra term in there to model the relationships between groups and the x variable as well as y? Both detect substantial between group variation in the intercept and not much in the slope as I would predict. But I need a way to tell these two apart. Any thoughts would be helpful.

This has been helpful in me restating the question. So I want to re-ask the question with an example which I hope will make it clear why I want to be able to tell these two models apart. Let's imagine that Y is the average student test score at a school, and X is spending per student in that school. Our grouping variables are 5 different school districts.

Data in the top figure shows that an increase in spending within a district means that test scores increase. It also shows that between districts there are differences is scores, but that's clearly because some districts spend more student than others.

Data in the second figure show similarly that within a district student scores increase as spending increases. It also shows that between districts there are differences in test scores. However we don't know what is driving those differences, unlike in the first set of data. This is a pretty common situation I've encountered in building models. The former is not.

So what I'm asking is what is the appropriate model that captures the following features from the first dataset:

More generally stated, how do you handle a scenario where you're building a hierarchical model where the grouping variable is correlated with one of your continuous independent variables (e.g. the first scenario). I feel like the model I've presented get's at points 1. and 2., but not point 3. So I'm really seeking a way to tease these two scenarios apart.

Normally I might add an extra level of hierarchy if there was another group level explanatory variable. Continuing our example, maybe in the 2nd dataset there are differences between district because in some districts parents have more time to spend on homework with students. So we would add that as a group level predictor in a hierarchical model. But that wouldn't work in the first scenario.

You don't need extra terms in the models, less actually. It is plain to see by your plots, but if you look at summary(m2) you will see that the variance for random effect for x is really small, and the variance for the intercept is quite small as well.

Similarly for the m1 model, you can see from the plot that the slopes are all the same, but the intercept varies. You can use an F-test to check the model with only random intercepts versus the model with random slopes and intercepts you specified.

Also just looking at the variance estimates of the random intercepts and effects for summary(m1) you would have come to the same conclusion that using random slopes adds nothing to the model.

Not the answer you're looking for? Browse other questions tagged r mixed-model multilevel-analysis random-effects-model or ask your own question.