PCA scores in a for portfolio replication task: stumble over mean-centering question

I'm trying to implement Principal Component Analysis (PCA) in a portfolio replication procedure. (The replication procedure looks like regression: there is a vector representing payoffs of an asset under different ecocnomic scenarios, I need to find a linear combination of vectors of another assets that fits the most closely to an initial asset).

Coefficients I get from regression should tell me how many assets I need to buy and sell to get approximately the same payoff as the asset I'm trying to replicate.

There is a problem with regression as the candidate asset matrix is ill-conditioned: assets show high correlation. There's a hope that orthogonal principal components could resolve this problem.

I need to do a PCA decomposition of candidate assets matrix, take only first $n$ components, do optimization and get components coefficients. Then I need to transform the coefficients back into an original basis.

Now the problem: PCA usually works with mean-centered data, but if I subtract means from the original data, I don't know how to interpret resulting coefficients in my case and don't know how to reverse the operation.

So far I'm doing eigen-decomposition of a covariance matrix, then using eigenvectors to make an orthogonal transformation of the data that is not mean-centered. Then I'm running a regression (actually L1 norm optimization) to get coefficients and transform them back into an original basis. The results are not bad, but I can't stop thinking about the problem with mean-centering, if I'm doing it completely wrong.

I was hoping to find a detailed math reasoning for this problem, but unfortunately failed. I'm very much a noob in this and my math skills are far from being good, so I would really appreciate your help if you can share some insights on the problem of mean-centering in the PCA.

Unstandardized principal component values (PC scores) are given by $\bf XU$, where $\bf X$ is the data matrix and $\bf U$ is the matrix of eigenvectors. If covariance matrix decomposed to $\bf U$, - then $\bf X$ must be centered to give proper PC scores. But you said that you used raw data to compute the PC scores despite that eigenvectors came from covariance matrix. What happens then?

The pic displays the principal components drawn in the space of the variables. In both computational cases, the PCs are the same - as axes. They orthogonally cross each other in the centre of the cloud. This is because covariance matrix was analyzed (it implies centering). However, the scores (shown as markers on the PC axes) are different. "Decentered PC1" = "Centered PC1" + 8.04. "Decentered PC2" = "Centered PC2" + 0.45. It is unclear what use could be of such decentered scores, since they do not share their means with each other and with the data cloud. 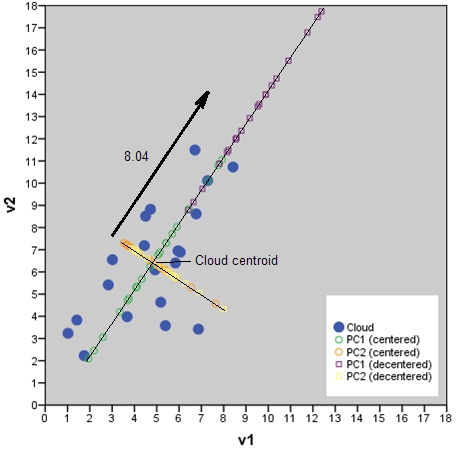 @ttnphns Thank you for your answer. You're right, in common case, without mean-centering PCA would lose a lot of sense.

But I think, if I use it to regularize regression, it could work.

Here I wrote a bit of algebra for myself. I hope it's correct, but I would appreciate some comments, cause I'm not completely sure.

Not the answer you're looking for? Browse other questions tagged pca optimization centering or ask your own question.

0
Extracting nonorthogonal sources in ICA/PCA/blind source seperation problem
40
How does centering make a difference in PCA (for SVD and eigen decomposition)?
3
A problem with interpretation of principal components as linear combinations of features
3
Principal Component Regression: to Center or not to Center
1
Grand-mean centering in GLMM changes estimates for variance (and everything else)?
2
Centering input data for Robust PCA (RPCA)?