How to visualize a fitted multiple regression model?

There is nothing wrong with your current strategy. If you have a multiple regression model with only two explanatory variables then you could try to make a 3D-ish plot that displays the predicted regression plane, but most software don't make this easy to do. Another possibility is to use a coplot (see also: coplot in R or this pdf), which can represent three or even four variables, but many people don't know how to read them. Essentially however, if you don't have any interactions, then the predicted marginal relationship between $x_j$ and $y$ will be the same as predicted conditional relationship (plus or minus some vertical shift) at any specific level of your other $x$ variables. Thus, you can simply set all other $x$ variables at their means and find the predicted line $\hat y = \hat\beta_0 + \cdots + \hat\beta_j x_j + \cdots + \hat\beta_p \bar x_p$ and plot that line on a scatterplot of $(x_j, y)$ pairs. Moreover, you will end up with $p$ such plots, although you might not include some of them if you think they are not important. (For example, it is common to have a multiple regression model with a single variable of interest and some control variables, and only present the first such plot).

An example plot that's similar (albeit with a binary moderator) can be seen in my answer to Plot regression with interaction in R.

Here is a web-based, interactive tool for plotting regression results in three dimensions.

This 3-D plot works with one dependent variable and two explanatory variables. You can also set the intercept to zero (i.e., remove the intercept from the regression equation).

This page shows a 3D scatter plot without the fitted regression model. 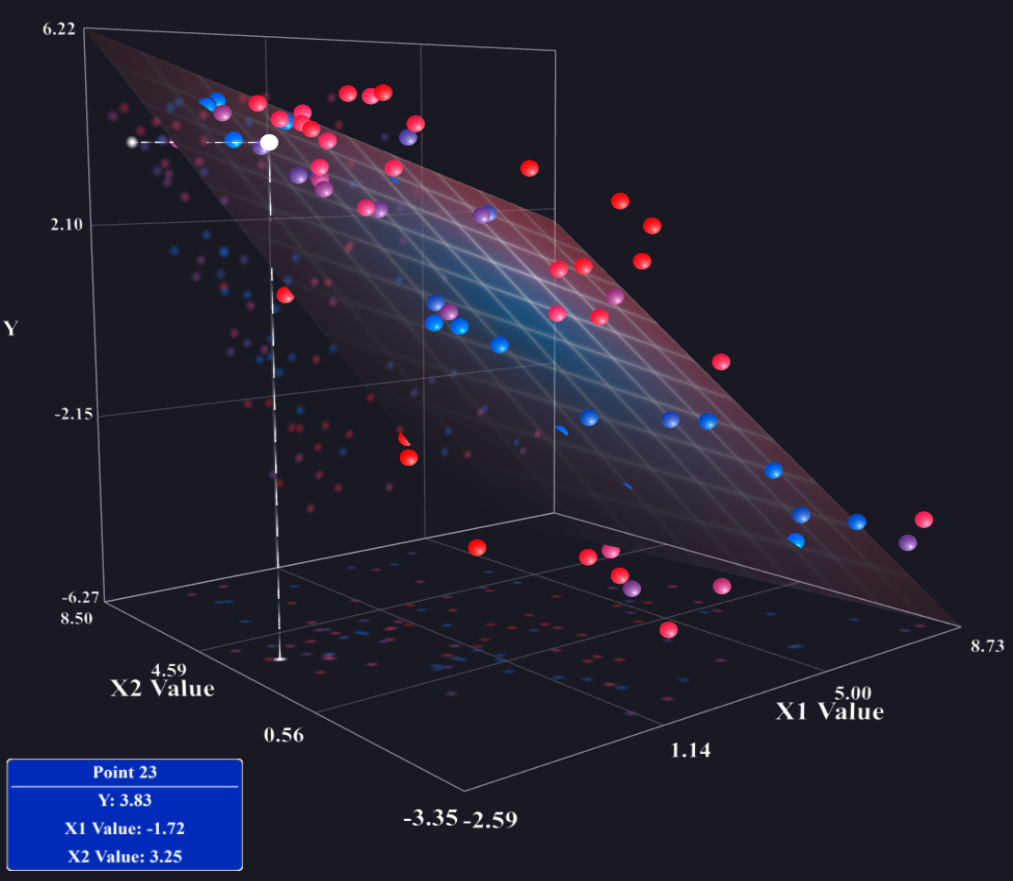 To visualize the model, rather than the data, JMP uses an interactive "profiler" plot. Here's a static view. 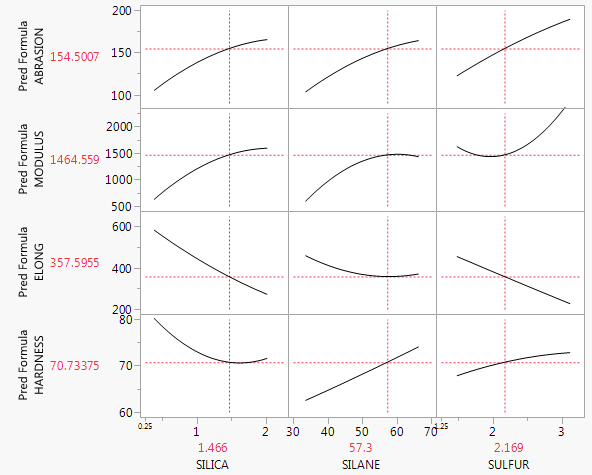 And here's a link to a dynamic view.

It's similar to your scatter plot idea and can be combined with it. The idea is that each frame shows a slice of the model for the corresponding X and Y variables with the other X variables held constant at their indicated values. In the interactive version, the X values can be changed by dragging the red vertical lines.

Disclosure: I'm a JMP developer, so don't take this as an unbiased endorsement.

Not the answer you're looking for? Browse other questions tagged regression data-visualization multiple-regression or ask your own question.

0
How to visualize multivariate linear regression?
5
Predicted by residual plot in R
3
In a regression problem, having a variable highly correlated with our target messes up the optimization of the parameters?
2
Put interested effect as IV or moderator in an interaction plot?
2
What is the meaning of the beta for the interaction between continuous variables in a linear mixed-model?
2
Visualizing a regression with 1 DV and multiple IV
2
Plot regression with interaction in R
2
Interpretation of odds ratios in a multiple logistic regression with interaction
2
Is the resulting function of plotting two variables imply that all other factors are being held constant?
0
R - Plot multiple regression line with confidence intervals with ggplot2
See more linked questions