am currently working on a problem where I have to calibrate weather parameters at a ground location using Satellite data available (1979-2012) over rectangular grid points and surface observatory data for a location (1980-2000). I have built two models - One for January months over 1980-2000 period and other taking data from November to April over 1980-2000.

Now the problem arises when I compare adjusted R-squared for both the models. Nov-Apr model gives me higher R-squared (0.7 vs. 0.2) whereas residual errors tell me the opposite story, giving poor results in the case of Nov-Apr model.

One option would be to calculate different components of R-squared and see if it can explain the differences. So how do I calculate and explain these components in R? or is there any better and efficient way?

Sorry about the delay in answering. What's going on, I think, is seasonality.

Now, if you regress ground on satellite, of course you are going to get a regression with some predictive power, because both measurements are being driven by the same true temperature. However, the predictive power will not be perfect. How good will the predictions be? Well, that depends on the ratio of signal (variance of movements in true temperature) to noise (variance of movements in $\nu$ and $\eta$. In fact, you can calculate the covariance and correlation between ground and satellite (assuming that the $\nu$ and $\eta$ are iid, independent of each other, and independent of true): \begin{align} Cov(\mathrm{ground},\mathrm{satellite}) &= V(\mathrm{true})\\ Corr(\mathrm{ground},\mathrm{satellite}) &= \frac{V(\mathrm{true})} {\sqrt{(V(\mathrm{true})+V(\nu))(V(\mathrm{true})+V(\eta))}} \end{align}

So, why is $R^2$ so much higher in the Nov to Apr sample than in the Jan sample? That's easy. As long as you are looking at a weather station far from the equator, there are big month-to-month differences in true. So, the more of the year you include in your time window, the higher is $V(\mathrm{true})$, and the higher is $R^2$.

If you prefer a numerical example, here is some R code where you can see what is going on. All I have done is implement the reasoning above in a very simple monte carlo. As you can see if you run the code, I have pretty well replicated your $R^2$ and mean squared residual results using somewhat realistic temperature data:

Look at the plots of ground against satellite for Jan only and Nov to Apr. You can see the higher $R^2$ in the Nov to Apr: 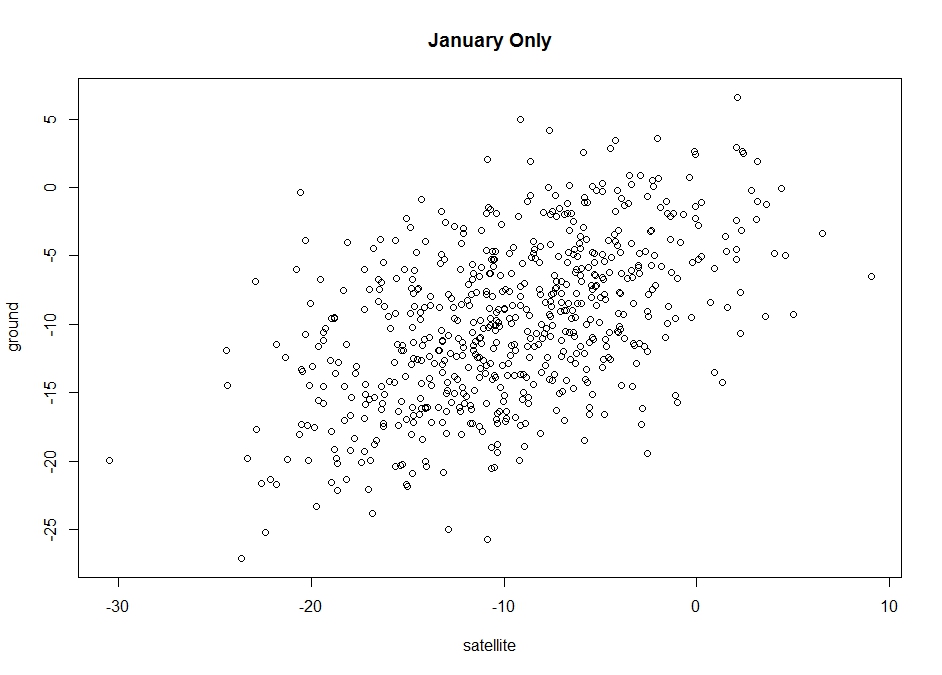 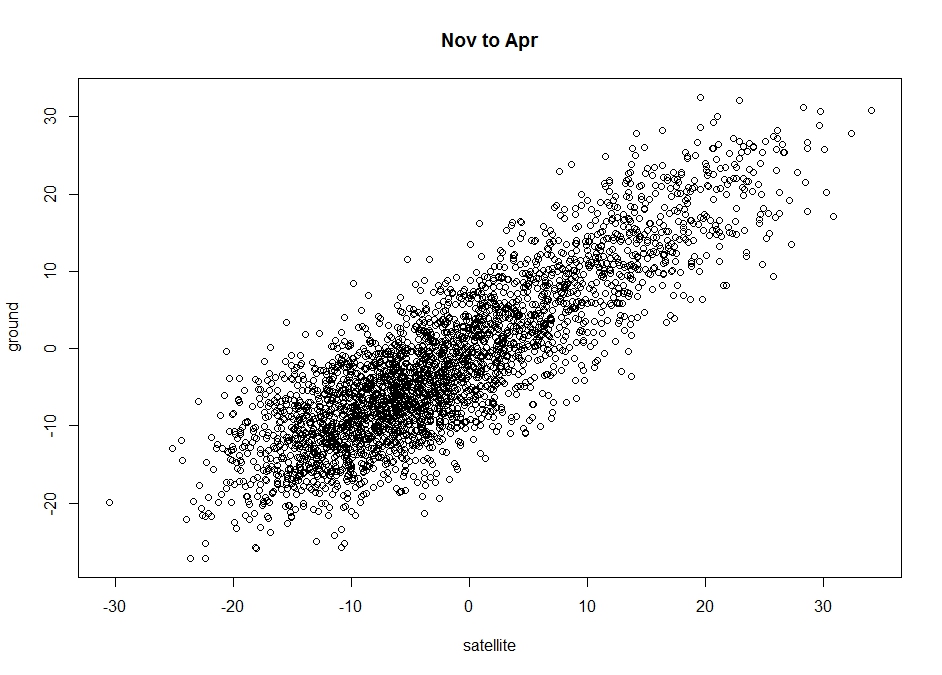 Obviously, in your application there is a lot more going on since you have other right-hand-side variables in your analysis. Also, the measurement errors are probably not nice, normally distributed, iid things like in the monte carlo. Nevertheless, I think what is going on in your data is likely to be what is going on in this monte carlo. In conclusion, I don't think your results are anything to worry about. They are exactly what we would expect in this circumstance.

Not the answer you're looking for? Browse other questions tagged multiple-regression model-selection r-squared model-comparison or ask your own question.