I know that the result holds with equality for the continuous case, it is known as Probability Integral Transform, but I am having trouble understanding it for the Discrete one since the inverse is not defined. Thank you. 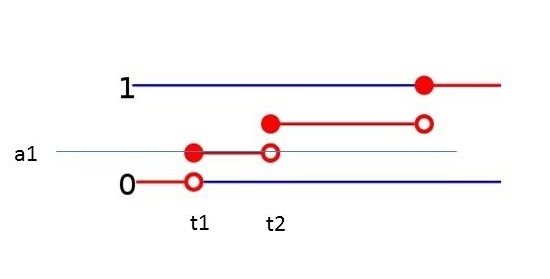 Consider a box $\Omega$ filled with tickets. On each ticket $\omega$ is written a number called $X(\omega)$. For any number $x$, whether or not it appears among the tickets, $F_X(x)$ is (defined to be) the proportion of tickets for which $X \le x.$

Consider drawing a single ticket from this box at random. Fixing a number $a$ in advance, what is the chance that the new value (the "quantile") written on the ticket will not exceed $a$? Of course it's the proportion of tickets with values of $a$ or lower. But all such tickets, by construction, have values of $X$ that lie within the lower $100a\%$ of all the values. Therefore this chance cannot exceed $a$.

The chance might be strictly less than $a$ when $a$ is not one of the actual proportions in the box. Because it cannot be greater than $a$ and now cannot be equal to $a$ it has to be less than $a$!

The preceding used a tickets in a box metaphor for reasoning about random variables. If we replace $\Omega$ by a probability space, insist that $X$ be a measurable function, and understand "proportion" as the value of the probability measure, then we will have a rigorous proof. And it's still just as trivial.

Not the answer you're looking for? Browse other questions tagged probability discrete-data or ask your own question.

88
What is meant by a “random variable”?
4
One Sigma error and 68% tolerance interval
0
Cumulative distribution functions (cdfs) range uniformly