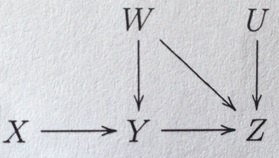 So I have this directed graph (above)

Each arrow represents a causal link. Is it possible to calculate the affect of X on Z, where all variables are observed except U and W. If so, what would the regression equation(s) look like. I believe it has to do with 2 step least squares, but I haven't been able to figure it out. Any help/tips would be much appreciated. Thanks.

In your graph, the effect of $X$ on $Z$ is unconfounded, since there are no "back-door" paths from $X$ to $Z$ (i.e. paths that have an arrow into $X$). So you will get an unbiased estimate of the effect if you simply regress $Z$ onto $X$. You can use any form of regression.

However, in one of the comments you said that "w affects both the dependent and the independent variable", so I think maybe there is a typo in the question, and you are really interested in the effect of $Y$ on $Z$ – is that the case? If so, you could use $X$ as an instrumental variable to estimate the effect of $Y$ on $Z$. I think this is why you are referring to "2 step least squares".

Instrumental variables methods usually assume the relationships between the variables are linear. There are non-linear versions but I'm less familiar with them, so here I'll assume you are dealing with a linear system. Assuming the relationships between your variables are linear, each direct causal effect can be represented with a linear coefficient. I've labeled the effects in your diagram:

You want to estimate $\beta$. This is possible, using $X$ as an instrument, because you can get unbiased estimates of the causal effect of $X$ on $Y$, and of $X$ on $Z$.

First note that the effect of $X$ on $Z$ is easy to calculate from the structural equations for $Z$ and $Y$ (where the $\varepsilon$ terms represent independent, exogenous noise):