Modelling relation between two persistent AR(1) processes? Is my approach reasonable and how to adjust standard errors?

I came up with the following solution to this dilemma. Why not model both $y_t$ and $x_t$ as AR(1) processes with potentially correlated errors. That is:

we get by rearranging

Fair enough, this is a little bit complicated, but it allows me to control $\beta$ without changing the structure of either $y_t$ or $x_t$ and both those processes are AR(1) in this setup.

I basically have two questions: 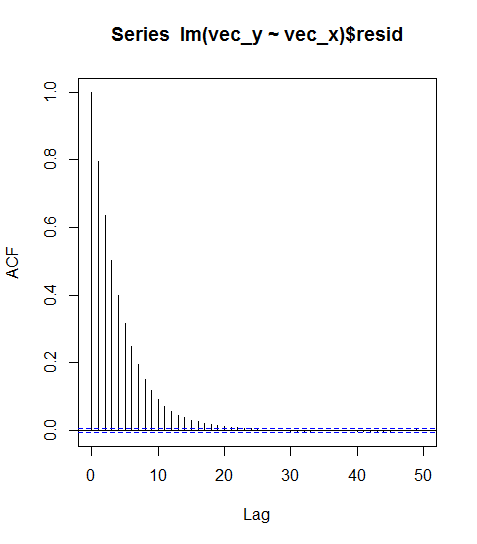 Given the information in the question I do not see any problems with such simulation set-up. You are modelling VAR(1) process and then explore the contemporaneous relationship between its components. Perfectly reasonable, although I would double check that this conforms to your empirical model.

As for the second question, the best way would be to figure out the exact covariance structure of the stationary process $\varepsilon_t=y_t-\beta x_t$ and then use GLS instead of OLS with the covariance matrix exactly specified. This way you would get the efficient estimates of $\beta$ and subsequently the smallest possible standard errors. Another way is to use autocorrelation-robust standard errors. In R you can calculate them using package sandwich:

Here I used function coeftest from the package lmtest to get the usual summary output. Note that for large sample sizes the calculation of robust covariance matrix can take up some time.

Not the answer you're looking for? Browse other questions tagged standard-error autocorrelation or ask your own question.