How to best visualize one-sample test?

We are currently writing a paper with several one-sample Wilcoxon tests. While visualizing two-sample tests is easy via boxplots, I was wondering whether there is any good way to visualize one-sample test results?

I would like to get Z-value instead of V-value. I know that if I use coin package instead of basic stats I will have z-values, but coin package seems not to be able perform one-sample Wilcoxon test.

Or were you after some interval for the median, like you get with notched boxplots (but suited to a one sample comparison, naturally)?

Here's an example of that:

This uses the interval suggested in McGill et al (the one in the references of ?boxplot.stats). One could actually use notches, but that might increase the chance that it is interpreted instead as an ordinary notched boxplot.

Of course if you need something to more directly replicate the signed rank test, various things can be constructed that do that, which could even include the interval for the pseudo-median (i.e. the one-sample Hodges-Lehmann location estimate, the median of pairwise averages).

Indeed, wilcox.test can generate the necessary information for us, so this is straightforward:

and this can be plotted also:

[The reason the boxplot interval is wider is that the standard error of a median at the normal (which is the assumption underlying the calculation based off the IQR) tends to be larger than that for a pseudomedian when the data are reasonably normalish.]

And of course, one might want to add the actual data to the plot:

R uses the sum of the positive ranks as its test statistic (this is not the same statistic as discussed on the Wikipedia page on the test).

The code I used to generate the fourth plot (from which the earlier ones can also be done by omitting unneeded parts) is a bit rough (it's mostly specific to the question, rather than being a general plotting function), but I figured someone might want it:

I may come back and post more functional code later.

If you like boxplots, you can as readily show a single boxplot with a line or other reference showing your hypothesised value. (@Glen_b posted an answer with an excellent simple example precisely as I was first writing this.)

It is arguable that boxplots, now very popular, are massively overused for one-sample and two-sample exploration. (Their real value, in my view, is when you are comparing many sets of values, with number of samples or groups or variables more like 10, 30 or 100, and there is a major need to see overall patterns amid a mass of possible detail.)

The key point is that with just one or two samples (groups, variables), you have space on a plot to show much more detail, detail that could be interesting or important for comparison. With a good design, such detail need not be distracting in visual comparison.

Evidently, in most usual versions the box plot suppresses all detail in its box, showing the middle half of the data, except in so far as the position of the median inside the box conveys some information. Depending on the exact rules used, such as the 1.5 IQR convention of showing data points individually if and only if they are 1.5 IQR or more from the nearer quartile, it is even possible that the box plot suppresses most of the detail about the other half of the data. Often, and perhaps even usually, such detail may be irrelevant to something like a Wilcoxon test, but being prepared to see something illuminating in the data display is always a good idea.

A display that remains drastically underused in many fields is the quantile plot, a display of the ordered values against an associated cumulative probability. (For other slightly technical reasons, this cumulative probability is typically not $1/n, \cdots, n/n$ for sample size $n$ but something like $(i - 0.5)/n$ for rank $i$, 1 being the rank of the smallest value.)

Here are your example data with a reference line added for 1.1. 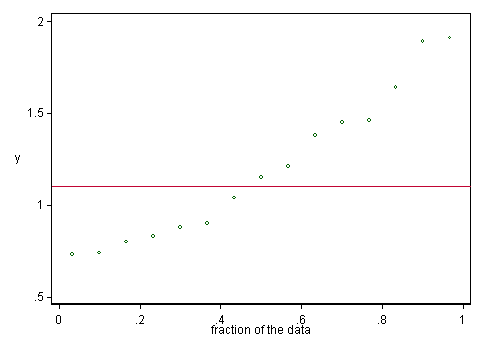 In other examples, key points include

Some will want to point out that cumulative distribution plots or survival function plots show the same information, and that's fine by me.

Another very useful plot is the dot or strip plot (which goes under many other names too), but I wanted to blow a small trumpet for quantile plots here.

R details I leave for others. I am focusing here on the more general statistical graphics question, which clearly cuts across statistical science and all software possibilities.

Incidentally, I don't know the background story but the name wilcox.test in R seems a poor choice to me. So, you save on typing two characters, but the name encourages confusion, not least because of past and present people in statistical fields called Wilcox. Lack of justice for Mann and Whitney is another detail. The person being honoured was Wilcoxon.

Not the answer you're looking for? Browse other questions tagged r data-visualization wilcoxon-signed-rank or ask your own question.