When is the median more affected by sampling error than the mean?

I'm writing a paper on making probability estimates, and it's been asserted to me that I should take the median of the estimates given by my participants, rather than the mean. I've been told I should do this because the mean is more affected by sampling error than the median.

Why is this? Is this something that is always true, or which only holds under certain circumstances?

Imagine that a variable takes values 0 and 1 with probability both 0.5. Sample from that distribution and most of the medians will be 0 or 1 and a very few exactly 0.5. The means will vary far less. The mean is much more stable in this circumstance.

Here is a sample graph of results. The plots are quantile plots, i.e. ordered values versus plotting position, a modified cumulative probability. The results are for 10,000 bootstrap samples from 1000 values, 500 each 0 and 1. The means range fortuitously but nicely from 0.436 to 0.564 with standard error 0.016. The medians are as said, with standard error 0.493. (Closed-form results are no doubt possible here too, but a graph makes the point vivid for all.) 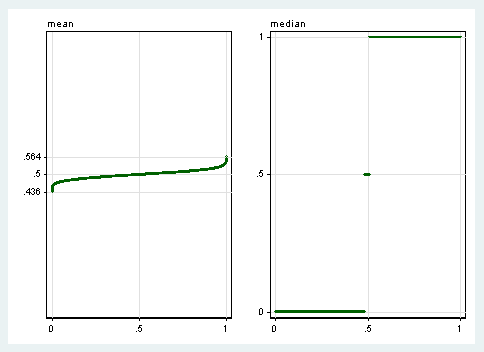 As advised by every treatment of robust statistics, a very common situation is that your data come with tails heavier than Gaussian and/or with outliers, and in those circumstances median will almost always be more robust. The point is that that is not a universal general result.

All that said, what relevance is a general result? You can at a minimum establish by bootstrapping the relative variability of mean and median for your own data. That's what you care about.

Where did you hear this? The usual reason for preferring the median is that it is less affected by extreme values than the mean. However, it is in general less sensitive to changes in the data.

I ran a tiny example in R

In this particular case, the mean was more affected than the median.

Not the answer you're looking for? Browse other questions tagged distributions sampling mean robust median or ask your own question.

83
Why haven't robust (and resistant) statistics replaced classical techniques?
14
Standard error of the median
5
Should I use an average to summarize ordinal data?