I am not sure if this is the place to ask, have tried to read up on probability density function (PDF) in order to answer this question but to no avail.

How do I go about starting on this?

How do I generate a function based on the given $\lambda$ and that small $t$ symbol.

An explanation before the answer would be nice. Appreciate all the help needed. 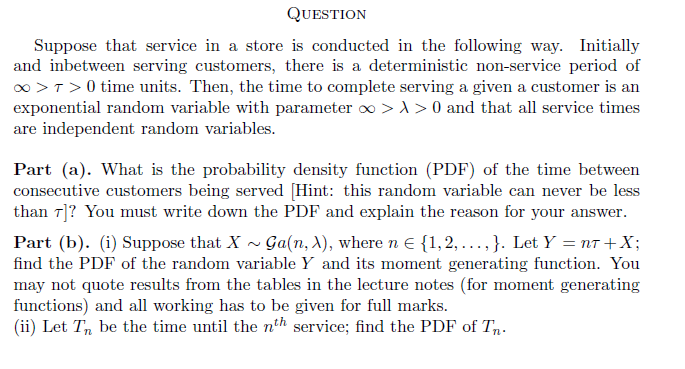 One general approach which you can adapt for part (a):

You just need to get the pdf from the cdf and get the limits sorted out.

If you know it, you just start by writing down the cdf; then $P(X≤z−c)$ simply requires substitution, not integration. So it's nothing more than 'substitute then differentiate'... but you must take care with the limits on the random variable, since $Z$ is clearly defined over a different set of values than $X$ is; what's needed there is clear from the last part of the line of algebra in my question.

In part (b), note that $nτ$ is just a constant. It's the same problem as before (a shifted distribution), but with a gamma instead of an exponential; the hint in my answer above is general enough to work for both.

The only new trick is finding the MGF, which should involve a straightforward manipulation of the integral for the MGF to get something times a Gamma MGF.

... and (b)(ii) simply involves recognizing the relationship between parts (a) and (b).

Not the answer you're looking for? Browse other questions tagged probability self-study pdf or ask your own question.

15
Area under the “pdf” in kernel density estimation in R
3
The pdf of multivariate normal distribution with high correlation values
0
Why does the density function has product of variance and covariance for higher model order time series
13
Whence the beta distribution?
2
What is a good name for a density function that does not relate to probability?