Why does the Lasso provide Variable Selection?

I've been reading Elements of Statistical Learning, and I would like to know why the Lasso provides variable selection and ridge regression doesn't.

Both methods minimize the residual sum of squares and have a constraint on the possible values of the parameters $\beta$. For the Lasso, the constraint is $||\beta||_1 \le t$, whereas for ridge it is $||\beta||_2 \le t$, for some $t$.

I've seen the diamond vs ellipse picture in the book and I have some intuition as for why the Lasso can hit the corners of the constrained region, which implies that one of the coefficients is set to zero. However, my intuition is rather weak, and I'm not convinced. It should be easy to see, but I don't know why this is true.

So I guess I'm looking for a mathematical justification, or an intuitive explanation of why the contours of the residual sum of squares are likely to hit the corners of the $||\beta||_1$ constrained region (whereas this situation is unlikely if the constraint is $||\beta||_2$).

Let's consider a very simple model: $y = \beta x + e$, with an L1 penalty on $\hat{\beta}$ and a least-squares loss function on $\hat{e}$. We can expand the expression to be minimized as:

Keep in mind this is a univariate example, with $\beta$ and $x$ being scalars, to show how LASSO can send a coefficient to zero. This can be generalized to the multivariate case.

It should be intuitively clear the same logic applies, with appropriate sign changes, for a least squares solution with $\hat{\beta} < 0$.

With the least squares penalty $\lambda\hat{\beta}^2$, however, the derivative becomes:

which evidently has solution $\hat{\beta} = y^Tx/(x^Tx + \lambda)$. Obviously no increase in $\lambda$ will drive this all the way to zero. So the L2 penalty can't act as a variable selection tool without some mild ad-hockery such as "set the parameter estimate equal to zero if it is less than $\epsilon$".

Obviously things can change when you move to multivariate models, for example, moving one parameter estimate around might force another one to change sign, but the general principle is the same: the L2 penalty function can't get you all the way to zero, because, writing very heuristically, it in effect adds to the "denominator" of the expression for $\hat{\beta}$, but the L1 penalty function can, because it in effect adds to the "numerator".

Note that for the L1 norm both have the same penalty, but the more spread out weight has a lower penalty for the L2 norm.

I think there are excellent anwers already but just to add some intuition concerning the geometric interpretation:

"The lasso performs $L1$ shrinkage, so that there are "corners" in the constraint, which in two dimensions corresponds to a diamond. If the sum of squares "hits'' one of these corners, then the coefficient corresponding to the axis is shrunk to zero.

As $p$ increases, the multidimensional diamond has an increasing number of corners, and so it is highly likely that some coefficients will be set equal to zero. Hence, the lasso performs shrinkage and (effectively) subset selection.

In contrast with subset selection, ridge performs a soft thresholding: as the smoothing parameter is varied, the sample path of the estimates moves continuously to zero."

The effect can nicely be visualized where the colored lines are the paths of regression coefficients shrinking towards zero. 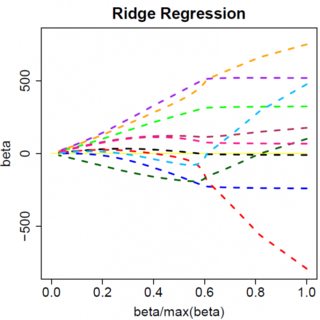 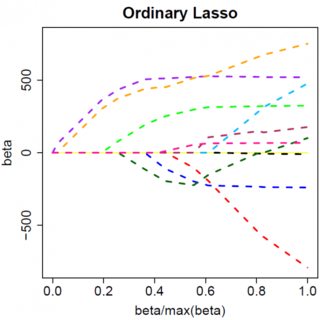 vonjdvonjd
5,84644 gold badges4747 silver badges5858 bronze badges
$\endgroup$
Add a comment  |
0
$\begingroup$
Want to improve this post? Provide detailed answers to this question, including citations and an explanation of why your answer is correct. Answers without enough detail may be edited or deleted.

I recently created a blog post to compare ridge and lasso using a toy data frame of shark attacks. It helped me understand the behaviors of the algorithms especially when correlated variables are present. Take a look and also see this SO question to explain the shrinkage toward zero.

Not the answer you're looking for? Browse other questions tagged regression feature-selection lasso regularization or ask your own question.

4
What is the mathematical rigorous proof that L1 regularization will give sparse solution?
5
Sparsity in Lasso and advantage over ridge (Statistical Learning)
9
Why L1 regularization can "zero out the weights" and therefore leads to sparse models?
3
Difference between L1 and L2 Regularization (in Lasso and Ridge Regression)
1
why l1 norm can result in variable selection but not l2
0
Why feature selection using `L1` and not using `L2` norm?
0
Why does Lasso Regression only eliminate some features
0
Sparsified parameters for lasso regression
0
Why does Lasso Regression shrink coefficients to 0 instead of uniformly decreasing all coefficients
1
Does L1 regularization (Lasso) always leads to feature reduction?
See more linked questions

29
Why will ridge regression not shrink some coefficients to zero like lasso?
25
Bridge penalty vs. Elastic Net regularization
2
Why regularization/shrinkage method works for p>n?
1
The Co-efficients of predictors in Lasso
1
Lasso Regression as Variable Selection
9
Understanding Lasso Regression's sparsity geometrically
1
Intersection of MSE-Loss and Regularization Term