The connection between Bayesian statistics and generative modeling

Why it is especially appealing to use Bayesian statistics in the absence of complete data, if at all?

Note that I come from a more machine learning oriented view, and I am interested in reading more about it from the statistics community.

Any good reference that discusses these points would be greatly appreciated. Thanks.

Bayesian estimation is inherently about specifying a full probability model and performing inference conditional on the model and data. That makes many Bayesian models have a generative feel. However to a Bayesian the important distinction is not so much about how to generate the data, but more about what is needed to obtain the posterior distribution of the unknown parameters of interest.

At a more intuitive level, there is a clear link between "generating data" and "computing the posterior distribution." Rubin (1984) gives the following excellent description of this link: 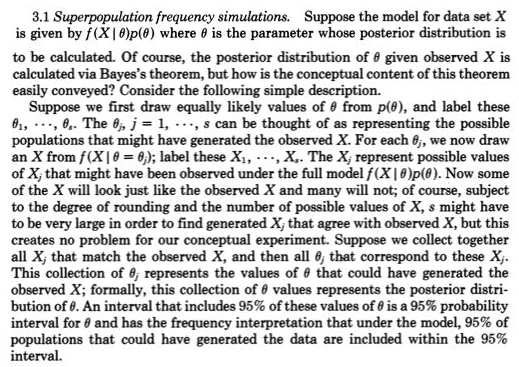 Bayesian statistics is useful given missing data primarily because it provides a unified way to eliminate nuisance parameters -- integration. Missing data can be thought of as (many) nuisance parameters. Alternative proposals such as plugging in the expected value typically will perform poorly because we can rarely estimate missing data cells with high levels of accuracy. Here, integration is better than maximization.

Discriminative models like p(y|x) also become problematic if x includes missing data because we only have data to estimate p(y|x_obs) but most sensible models are written with respect to the complete data p(y|x). If you have a fully probability model p(y,x) and are Bayesian, then you're fine because you can just integrate over the missing data like you would any other unknown quantity.

@Tristan: Hope you don't mind my reworking of you answer as I am working on how to make the general point as transparent as possible.

This actually was very clearly depicted by Galton in a two stage quincunx in the late 1800,s. See figure 5 > Stigler, Stephen M. 2010. Darwin, Galton and the statistical

It is equivalent but perhaps more transparent that

Nothing much new for missing values in the former as one just adds possible unknowns for a probability model generating missing values and treats missing as just one of the possible knowns (i.e. the 3rd observation was missing).

Recently, approximate Bayesian computation (ABC) has taken this constructive two-stage simulation approach seriously when p(possible knowns=knowns|possible unknowns) cannot be worked out. But even when this can be worked out and the posterior easily obtainable from MCMC sampling (or even when the posterior is directly available due to the prior being conjugate) Rubin’s point about this two-stage sampling construction enabling easier understanding, should not be overlooked.

For instance, I am sure it would have caught what @Zen did here Bayesians: slaves of the likelihood function? because one would needed to draw a possible unknown c from a prior (stage one) and then draw a possible known (data) given that c (stage 2) which would not have been a random generation as p(possible knowns|c) would not have been be a probability except for one and only one c.

From @Zen “Unfortunatelly, in general, this is not a valid description of a statistical model. The problem is that, by definition, $f_{X_i\mid C}(\,\cdot\mid c)$ must be a probability density for almost every possible value of $c$, which is, in general, clearly false.”

64
Are bayesians slaves of the likelihood function?
4
Why do sampling distributions provide a major simplification on the route statistical inference?
4
Are all generative Models based on Bayes?
4
Bayesian Updating for a Discrete Rating Value
3
Are there nonparametric generative models for datasets?

3
Why doesn't it seem to be standard to multiply prior scale by fraction of non-zero predictor observations?
8
What is the relationship between graphical models and hierarchical Bayesian models?
5
Examples of usage of community of priors or why aren't they used more commonly?
9
Why is the marginal likelihood difficult/intractable to estimate?
36
Why is the exponential family so important in statistics?