How do I combine multiple prior components and a likelihood?

Lets imagine I am comparing two groups of animals (treatment/control). There is previous data from cell cultures indicating the treatment should have a positive effect. This gives me "prior component 1". There are also two previous studies very similar to my own. One of them had an effect of 5 +/- 1 (prior component 2), the other of 1 +/- 2 (prior component 3). I feel the cell culture data is highly convincing, and that the prior component 3 is not such a reliable study. So I choose some weights of 3,1, and .5 for each and multiply.

1) To calculate the "overall prior" do I simply add these together as shown in the lower right panel?

2) Am I supposed to normalize these components before adding them? 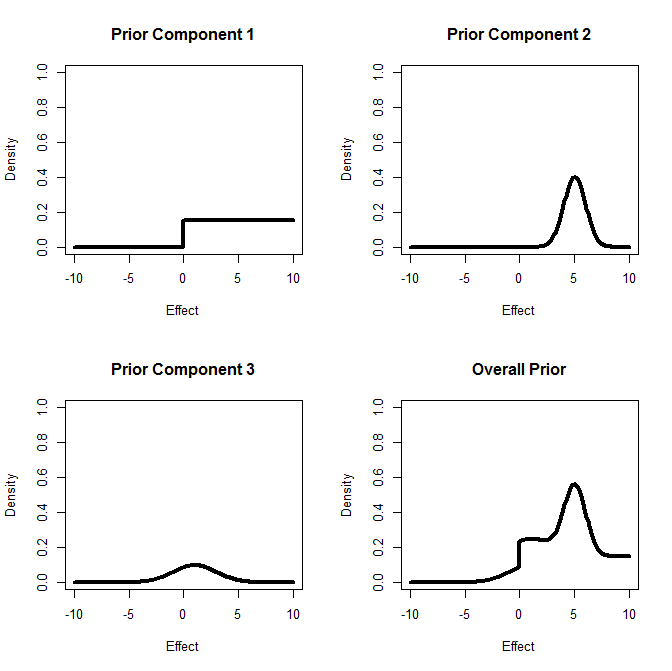 I then calculate a likelihood function for my current data as shown in the upper panel. 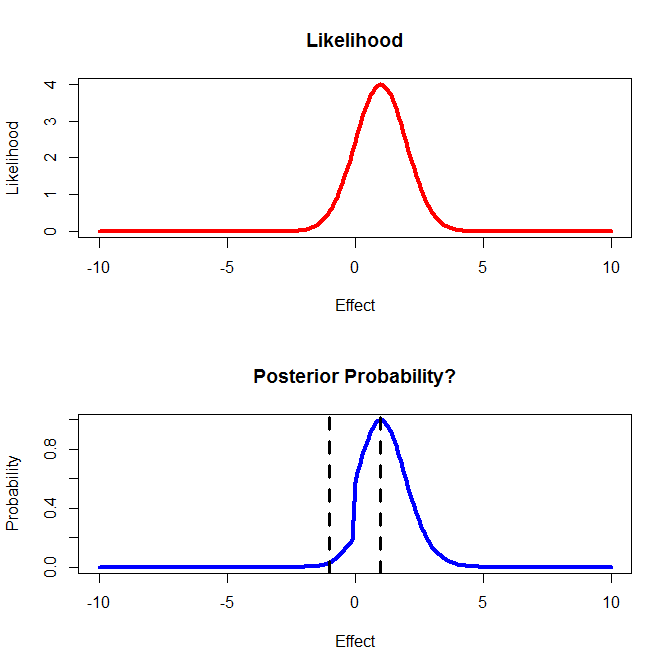 3) How do I combine this information with the prior information shown in the first figure? For the lower panel I simply multiplied overall prior*likelihood.

5) Obviously there are a number of ways of choosing a decision (% density between -1 and 1, etc) Is there a best choice?

6) I feel I am doing something incorrectly, but maybe not. Is there a name for what I am trying to accomplish?

If it helps I am trying to use the framework proposed by Richard Royall:

2) The likelihood function + priors tells be "what I should believe"

3) The likelihood function + priors +cost/benefit determines ""what I should do".

While the priors used here are subjective/nebulous they are built out of simple building blocks (uniform and normal distributions) that mathematically unsophisticated researchers can understand quickly. I think they convey my thought processes as a researcher well. Others may of course know of different background information. They should be able to build their own "compound prior" which may lead to a different decision than mine, but we should always agree on the likelihood function.

This approach (if implemented correctly, which I am not sure I am doing here), appears to me to model the actual thought processes of researchers and thus be suitable for scientific inference. The steps map to the common sections found in scientific papers. The priors are the introduction, the likelihood is the results, and the posterior probability is the discussion.

I don't think there is anything wrong with your approach, but there are some technical details which makes your implementation incorrect. Now when you have a mixture prior, you will also get a mixture posterior. The easiest way to procede, I think, is to calculate the component posteriors and the component weights separately for each component. So the prior is given by:

Where you need to ensure that each $f_c(.)$ is a properly normalised density. The proportionality sign accounts for the sum of the weights not necessarily suming to one. Multiply by the likelihood and you have a posterior proportional to:

Now we can turn this into a new mixture distribution by normalising the term in brackets, so we have:

Where $f_c(D)=\int f_c(\theta)p(D|\theta) d\theta$. As with the prior, the proportionality constant is just the sum of the "new" weights, for a properly normalised posterior of:

This expression means that you can procede in two steps.

This is very simple for your data, as you have two congujate "normal-normal" components, and one "uniform-normal" components. I would go further but I don't know if your data-based variance is assumed known or estimated from the data.

Not the answer you're looking for? Browse other questions tagged prior likelihood decision-theory or ask your own question.

10
Implications of current debate on statistical significance
11
Is randomization reliable with small samples?

8
How do I complete the square with normal likelihood and normal prior?
1
How can I use likelihoods to compare these three groups? Should I want to do this?
21
Posterior very different to prior and likelihood
8
Why not use Beta(1,1) as boundary avoiding prior on a transformed correlation parameter?
0
Priors in Bayesian MCMC
3
What would be the reason that the posterior distribution looks like the prior using MCMC
0
Simulating Bayesian Power Priors
2
ABC with non-uniform prior