Construct probability that measurement belongs to one of two sets

Assume we have a beam of light incident on an square array of photo detectors. The "counts" measured in the individual tubes follow Poisson statistics. A typical beam distributes light across 4 photo tubes, most in the tube closest to the point of incident. Noise would be distributed uncorrelated.

would be a good guess for the probability that this measurement was noise. Can I use a similar expression

even though counts would be correlated for the "true" case?

According to the comments after the question, this is a hypothesis testing situation. You have stipulated that you can accurately assess the null distribution of the individual cell counts. We need a test statistic. The nature of the problem suggests running a small kernel over the array (essentially to deconvolve the signal). A simple choice would be a 2 x 2 mean. We would then look at the maximum of those values. The Neyman-Pearson lemma says that a good test is based on setting a critical value for this statistic. The test size depends on the null distribution of the test statistic while its power depends on the intensity of the signal. You need to choose a critical value to appropriately balance the expected false positive rate with the power for the kinds of signals you are looking for.

If someone could jump in and tell us how to compute the distribution of $t$ that would be nice, but I suspect it's not an easy calculation. Would you consider a small simulation? It's easy to set up in R or Mathematica, for instance. 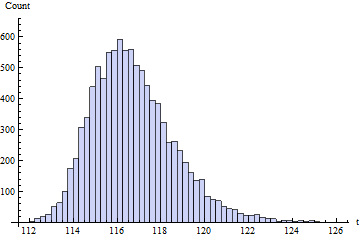 For the record, here is the Mathematica code used to generate this histogram.

Not the answer you're looking for? Browse other questions tagged hypothesis-testing correlation or ask your own question.

8
Test for independence, when I'm missing one bin of a 2x2 contingency
2
Measuring correlation or dependence between two data sets
11
Statistical Tests That Incorporate Measurement Uncertainty
2
Comparing two measurement devices without a criterion measurement
0
Several items for one construct
1
How to analyse association between two (paired) sets of measurements, when arbitrary to which set each member of a pair belongs