Why are diagnostics based on residuals?

In simple linear regression one often wants to verify if certain assumptions are met to be able to do inference (e.g. residuals are normally distributed).

Is it reasonable to check the assumptions by checking if the fitted values are normally distributed?

Why are diagnostics based on residuals?

In simple linear regression one often wants to verify if certain assumptions are met to be able to do inference (e.g. residuals are normally distributed).

The actual normality assumption isn't about the residuals but about the error term. The nearest thing to those that you have are the residuals, which is why we check them.

Is it reasonable to check check the assumptions by checking if the fitted values are normally distributed?

No. The distribution of fitted values depends on the pattern of the $x$'s. It doesn't tell you much at all about the assumptions. 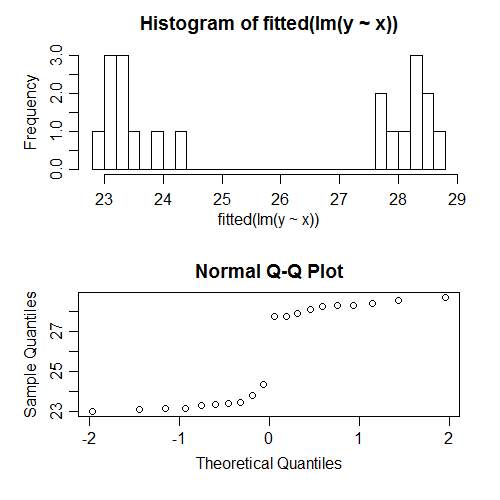 They're clearly non-normal; in fact they look bimodal. Why? Well, because the distribution of fitted values depends on the pattern of the $x$'s. The errors were normal, but the fitted values might be almost anything.

Another thing people often check (much more often, in fact) is normality of the $y$s... but unconditionally on $x$; again, this depends on the pattern of $x$s, and so doesn't tell you much about the actual assumptions. Again, I've generated some data where the assumptions all hold; here's what happens when we try to check normality of the unconditional $y$ values: 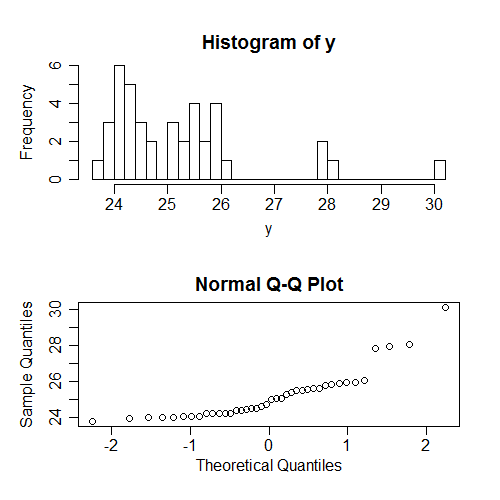 Again, the non-normality we see here (the y's are skew) is not related to the conditional normality of the $y$s.

In fact I have a textbook next to me right now that discusses this distinction (between the conditional distribution and unconditional distribution of $Y$) - that is, it explains in an early chapter why just looking at the distribution of the $y$'s isn't right $-$ and then in subsequent chapters repeatedly checks the normality assumption by looking at the distribution of the $y$ values $-$ without considering the impact of the $x$'s $-$ to assess the suitability of the assumptions (another thing it usually does is to just look at histograms to make that assessment, but that's a whole other problem).

What are the assumptions, how do we check them and when do we need to make them?

(There are actually some other assumptions I haven't mentioned, such as additive errors, that the errors have zero mean, and so on.)

If you're only interested in estimating the fit of the least squares line and not in say standard errors, you don't need to make most of these assumptions. For example, the distribution of errors affects inference (tests and intervals), and it can affect the efficiency of the estimate, but the LS line is still best linear unbiased for example; so unless the distribution is so badly non-normal that all linear estimators are bad, it's not necessarily much of an issue if the assumptions about the error term don't hold.

Not the answer you're looking for? Browse other questions tagged regression residuals diagnostic or ask your own question.

0
What is exactly the non-normality requisite for nonparametric tests?
0
Regression residuals and their properties
1
Why do some researchers test for normality of sample data?
134
What if residuals are normally distributed, but y is not?
117
Assessing approximate distribution of data based on a histogram
2
Model Evaluation for Discrete Regression
6
Taking the log of variables
2
Is $f(Y | X)$ in the same family as $f(Y)$?
2
Creating a simulation to find a p-value for a slope, is this valid?