Interpreting the residuals vs. fitted values plot for verifying the assumptions of a linear model 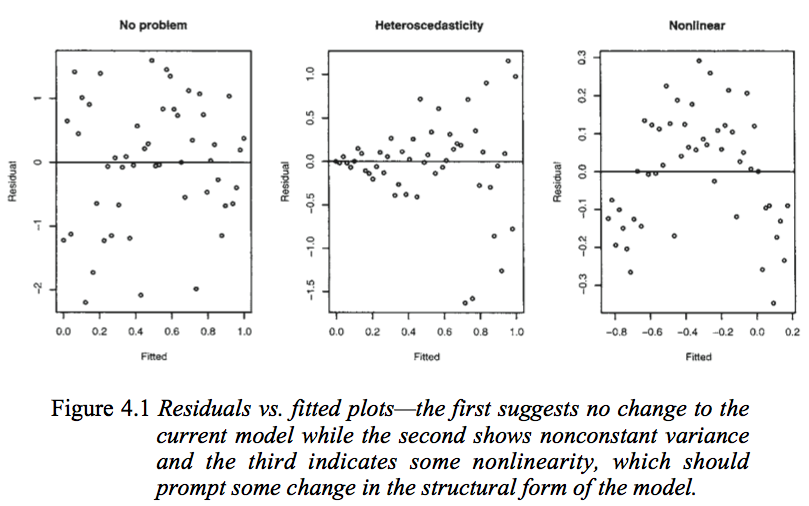 The second plot seems to indicate that the absolute value of the residuals is strongly positively correlated with the fitted values, whereas no such trend is evident in the third plot. So if it were the case that, theoretically speaking, in a heteroscedastic linear model with normally distributed errors

(where the expression on the left is the variance-covariance matrix between the residuals and the fitted values) this would explain why the second and third plots agree with Faraway's interpretations.

But is this the case? If not, how else can Faraway's interpretations of the second and third plots be justified? Also, why does the third plot necessarily indicate non-linearity? Isn't it possible that it is linear, but that the errors are either not normally distributed, or else that they are normally distributed, but do not center around zero?

Not really*, in those situations the plots look different to the third plot.

(i) If the errors were normal but not centered at zero, but at $\theta$, say, then the intercept would pick up the mean error, and so the estimated intercept would be an estimate of $\beta_0+\theta$ (that would be its expected value, but it is estimated with error). Consequently, your residuals would still have conditional mean zero, and so the plot would look like the first plot above.

(ii) If the errors are not normally distributed the pattern of dots might be densest somewhere other than the center line (if the data were skewed), say, but the local mean residual would still be near 0. 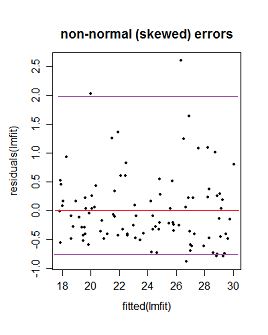 Here the purple lines still represent a (very) roughly 95% interval, but it's no longer symmetric. (I'm glossing over a couple of issues to avoid obscuring the basic point here.)

* It's not necessarily impossible -- if you have an "error" term that doesn't really behave like errors - say where $x$ and $y$ are related to them in just the right way - you might be able to produce patterns something like these. However, we make assumptions about the error term, such as that it's not related to $x$, for example, and has zero mean; we'd have to break at least some of those sorts of assumptions to do it. (In many cases you may have reason to conclude that such effects should be absent or at least relatively small.)

The second plot seems to indicate that the absolute value of the residuals is strongly positively correlated with the fitted values,

It doesn't "seem" to, it does. And that's what heteroskedastic means.

Then you give a matrix of all 1s, which is irrelevant; correlation can exist and be less than 1.

They do center around 0. Half or so are below 0, half above. It's harder to tell if they are normally distributed from this plot, but another plot that is usually recommended is a quantile normal plot of the residuals, and that would show whether they are normal or not.

Not the answer you're looking for? Browse other questions tagged regression residuals assumptions or ask your own question.

2
Interpreting the residuals vs. fitted values plot
0
What does this graphs mean in linear regression?
0
Cannot understand this residuals plot in r
99
Interpreting plot.lm()
39
Interpretation of plot (glm.model)
22
Is there i.i.d. assumption on logistic regression?
7
Trying to understand the fitted vs residual plot?
8
How to test for independence of residuals in linear model?
4
Is normality assessed in each individual group or for the entire dataset in repeated measures ANOVA?
3
Why is there "residual dots" in plot() of GAM?
See more linked questions