z-test vs t-test under assumptions

If we assume $n=m$ and for example $\sigma_1^2=1$ and $\sigma_2^2=2$ and investigate using simulation which test is better. How would we do that. It seems wise to check level and powers but how would one do that?

You'll need to assume some particular sample sizes (specific m and n), or do this over a grid of such values.

So you know the parameters of both distributions. Basically:

The case for power is the same, expect you do it for some set of values of $\delta$.

A common thing to do at the end is plot the rejection rates against delta, so you can get an idea what the power curve looks like.

Edit: Okay, you work in R; that would have been handy to know.

In R you probably want to use replicate rather than a loop.

Since you would do this for a set of delta values, you'd probably wrap that in a call to sapply.

[and then, if you then did that over various values of n, you might even put that in a loop]

It does a little unnecessary calculation, but that will hardly change the overall speed so I didn't bother with it.

Here's a plot that I generated after running the above code: 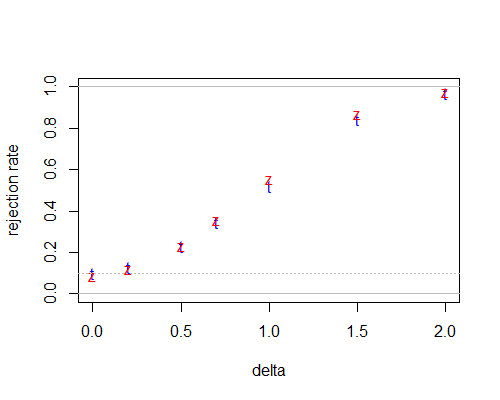 Note that you can compute standard errors (and intervals) for these estimated rejection rates.

Not the answer you're looking for? Browse other questions tagged hypothesis-testing t-test simulation z-test or ask your own question.

9
How to test if two samples are distributed from the same Gaussian process
7
What's wrong with ''multiple testing correction'' compared to ''joint tests''?
5
Understanding formulation of hypotheses in difference between two sample means (z test)
2
Why can we use Student t distribution for testing small populations with same variance?
1
Testing the difference of two means with unknown variances
0
Hypothesis testing: $H_0: \mu_1 \le \mu_2 \text{ vs } H_1: \mu_1 > \mu_2$ from two random samples