Multiple regression or partial correlation coefficient? And relations between the two

I don't even know if this question makes sense, but what is the difference between multiple regression and partial correlation (apart from the obvious differences between correlation and regression, which is not what I am aiming at)?

You see that the numerators are the same which tell that both formulas measure the same unique effect of $x_1$. I will try to explain how the two formulas are structurally identical and how they are not.

The formula for the partial correlation then appears clearly the formula of plain Pearson $r$, as computed in this instance between residuals (a) and residuals (b): Pearson $r$, we know, is covariance divided by the denominator that is the geometric mean of two different variances.

Standardized coefficient beta is structurally like Pearson $r$, only that the denominator is the geometric mean of a variance with own self. The variance of residuals (a) was not counted; it was replaced by second counting of the variance of residuals (b). Beta is thus the covariance of the two residuals relative the variance of one of them (specifically, the one pertaining to the predictor of interest, $x_1$). While partial correlation, as already noticed, is that same covariance relative their hybrid variance. Both types of coefficient are ways to standardize the effect of $x_1$ in the milieu of other predictors.

From the above formulas one obtains (and extending from 2-predictor regression to a regression with arbitrary number of predictors $x_1,x_2,x_3,...$) the conversion formula between beta and corresponding partial r:

Note: if we need to to compute partial correlations of $y$ with every predictor $x$ we usually won't use this formula requiring to do two additional regressions. Rather, the sweep operations (often used in stepwise and all subsets regression algorithms) will be done or anti-image correlation matrix will be computed. 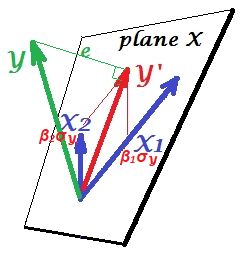 $Y'$ is the regression prediction (orthogonal projection of $Y$ onto "plane X" spanned by the regressors); $e$ is the error term; $\cos \angle{Y Y'}={|Y'|}/|Y|$ is the multiple correlation coefficient.

But how to obtain an impression of the corresponding partial correlation $r_{yx_1.x_2}$? To partial out $X_2$ from the other two variables one has to project them on the plane which is orthogonal to $X_2$. Below, on the left, this plane perpendicular to $X_2$ has been drawn. It is shown at the bottom - and not on the level of the origin - simply in order not to jam the pic. Let's inspect what's going on in that space. Put your eye to the bottom (of the left pic) and glance up, $X_2$ vector starting right from your eye.

All the vectors are now the projections. $X_2$ is a point since the plane was produced as the one perpendicular to it. We look so that "Plane X" is horizontal line to us. Therefore of the four vectors only (the projection of) $Y$ departs the line.