Most tests I have looked at (e.g. Mann-Whitney U, Wilcoxon) seem to compare two samples. However, since I have 15 samples in each population, I am confused as to whether these tests can be applied in this instance. Is it possible to just pool the data so that I have one aggregated distribution for each population, then run a test on the result?

Here is a selection of 5 distributions (histograms) from each population, plotted on the same axes: 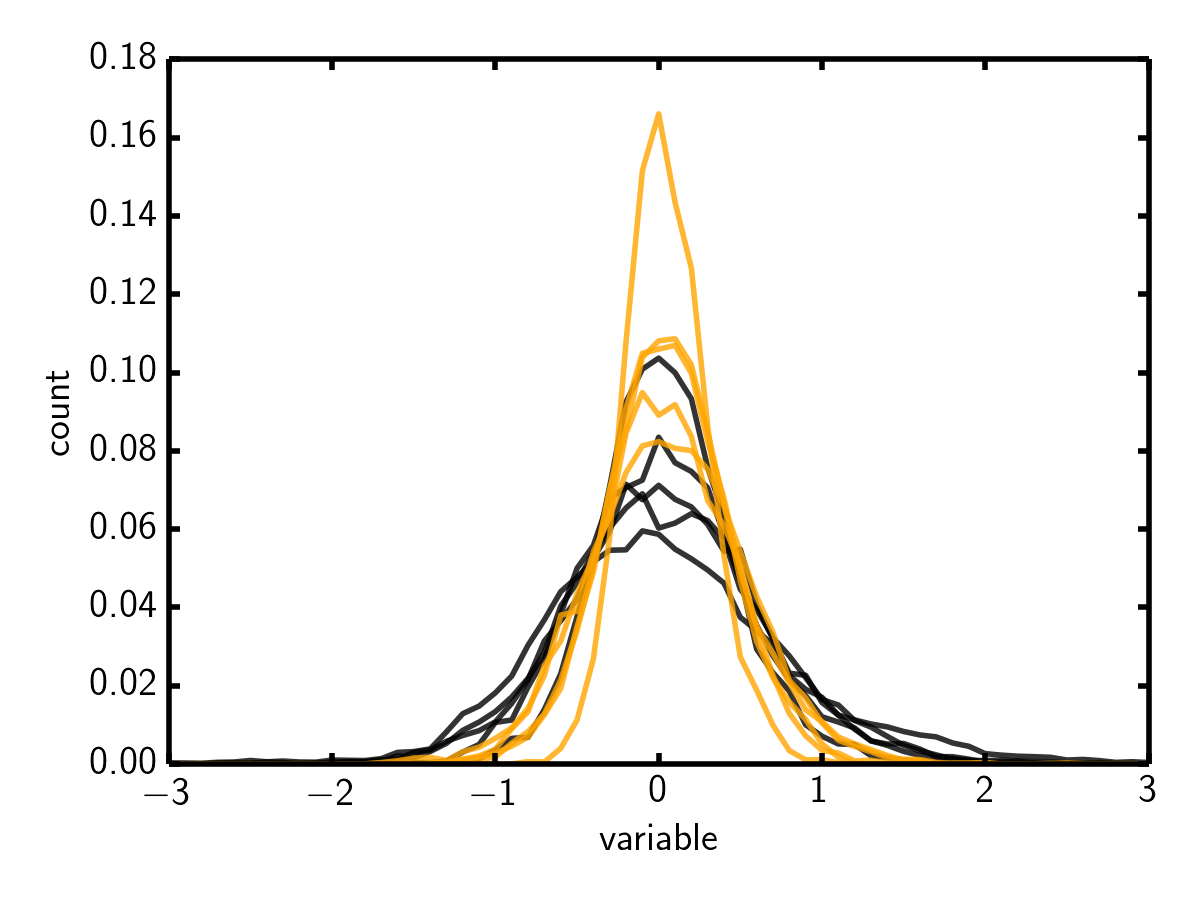 I want to know if there is a statistical difference between the sets (black and orange) of distributions.

I think your confusion lies in framing your problem incorrectly. Think less in terms of your raw data and more in terms of the entities that characterize your study.

Let's consider first a simpler case where each population is defined by only one feature. The obvious choice here would be a t-test. Now let's consider the choice where each population is defined by two features. Each individual in your dataset is a point in two dimensional space: you don't have "two distributions" for each individual, the individuals are being drawn from a two-dimensional multivariate distribution. Similarly, in your current problem setup, I contend that you are looking for a test to compare the means of two 15-dimensional multivariate distributions. I believe the appropriate test here is the two-sample Hotelling's T-square test, which is the multivariate analog of the two-sample Student's t-test.

If you are unsure, consider comparing your experiment with the example described here.

However, all this depends on whether the multiple measurements (the time series) are only used to account for measurment error or if they have a specific purpose (e.g. track a change over time during an experiment). For instance, if you want to model how the difference between populations changes over time you need to take the autocorrelation between time points into account. So the question is; why have you taken multiple measurements for each individual?

Basic code for the Levene's test (on means of individuals) would be:

Not the answer you're looking for? Browse other questions tagged hypothesis-testing distributions statistical-significance group-differences or ask your own question.

7
How to test that a set of distributions are located in a given order?
10
Mann-Whitney null hypothesis under unequal variance
1
Using CLT for hypothesis testing
9
Confused about the Mann-Whitney $U$ test. Does it test distribution equality (pdf) or just mean/median equality?