State of the art: Non-parametric density estimation with a boundary and data clumped near zero [duplicate]

I have some data which I wish to estimate the marginal distribution of. I have no real idea what parametric distribution would be suitable, so was planning on fitting a non-parametric (probably kernel) density estimate to the data.

However, there are two complications

2) The data is mostly clumped around zero -- it is probably fair to say that it is a mix of two distributions, one being almost a delta at $0$, and the other being a strictly positive distribution with a long tail.

I know of some methods to deal with 1), but the simple methods I have used (reflection kernels) lead to unsatisfactory results near zero. I don't really know what to do about 2).

What is the state of the art for this kind of problem? Maybe an R-package that implements something I could try out?

Happy to give an example of the data, but I'm not sure the best way to do this. Let me know and I can edit the question. 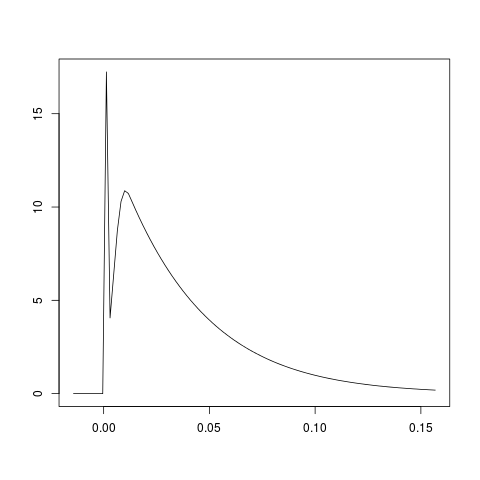 And with the zeros removed: 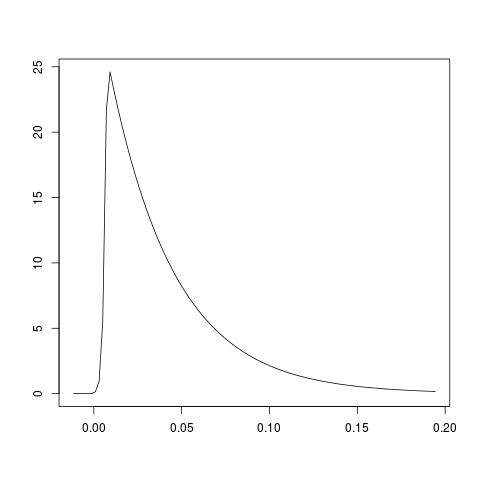 If you know the range of your data, you can use the inverse probit transformation. On a couple of examples, the fit looked very satisfying visually. This approach is explained in more detail in a clear paper[1]. I think there should be an R implementation but I couldn't find it (perhaps you can contact the author).

The approach can also be adapted to the case you where your random variable is distributed in $[0,+\infty)$

Not the answer you're looking for? Browse other questions tagged r nonparametric kernel-smoothing or ask your own question.