We have data with a binary outcome and some covariates. I used logistic regression to model the data. Just a simple analysis, nothing extraordinary. The final output is supposed to be a dose-response curve where we show how the probability changes for a specific covariate. Something like this: 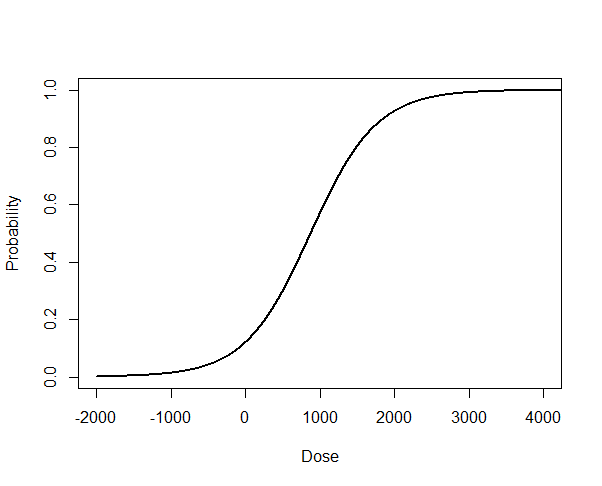 At first I was caught off guard by his argument, since I have never thought about this point. I did not have any arguments to why it would be justified to assume that the inflection point is at 0.5. After doing some research, I still don't have an answer to this question.

I came across 5-parameter logistic regression, for which the inflection point is an additional parameter, but it seems that this regression model is usually used when producing dose-response curves with a continuous outcome. I'm not sure if and how it can be extended to binary response variables.

Just for completeness, the R code for generating the above picture:

Just to add to what Scortchi said in one of the comments: The reviewer did indeed argue that biologically it might be more likely that the change in curvature occurs earlier than 0.5. Therefore his resistance against assuming that the inflection point is at 0.5.

As a reaction to the comment by Frank Harrell:

As example, I modified my model above to include a quadratic and a cubic term in gre (which is the "dose" in this example). 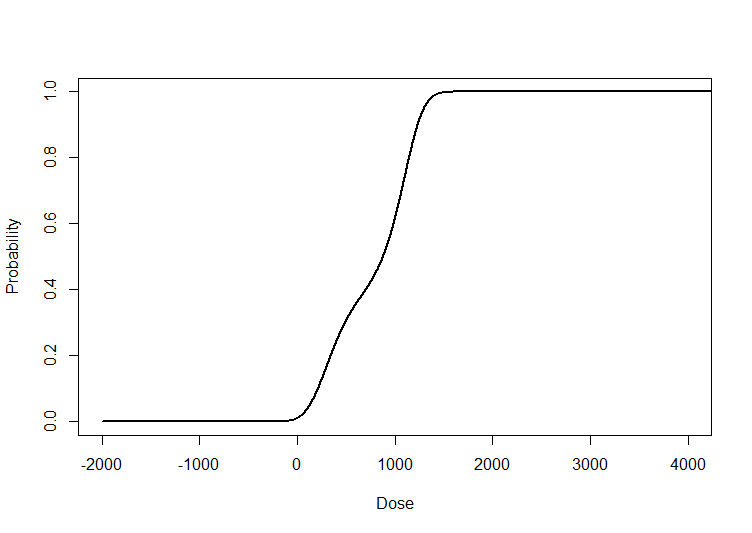 Despite the fact that it is probably not meaningful to add a quadratic and a cubic gre term in this case, we see that the form of the dose-response curve has changed. Indeed we now have two inflection points at about 0.25 and near 0.7.

As touched upon by @scortchi the reviewer was operating under the false impression that it is not possible to model nonlinear effects of predictors on the logit scale in the context of logistic regression. The original model was quick to assume linearity of all predictors. By relaxing the linearity assumption, using for example restricted cubic splines (natural splines), the entire shape of the curve is flexible and inflection point is no longer an issue. Had there been a single predictor and had it been expanded using a regression spline, one could say that the logistic model makes only the assumptions of smoothness and independence of observations.

It seems to me that the reviewer was just looking for something to say. Before examining such features of the specification like the implied inflection point, there is a ton of assumptions that we have made, in order to arrive at an estimable model. All could be questioned and debated -the use of the logistic function itself being a possible primary target: who told us that the conditional distribution of the underlying error term is logistic? Nobody.

So the issue is: what does the change of curvature signify? How important for the real-world phenomenon under study, may be the point at which this change of curvature happens, so that we would consider making it "data-driven"? Moving further away from the principle of parsimony?

The question is not "why the inflection point should be at 0.5?" But "how misleading it may be for our conclusions if it is left at 0.5?".

In m.h.o., the logit regression is a reasonable choice for dose- response. Of course, you can use probit , log-log, c-log-log link, and compare the goodness of fit (DEV, BIC, CAIC , etc.). But the simplest logit regression gives a comfortable formal assessment of the inflection point LD50 = -b0/b1. We remember that it is a specific point , for which we obtain the minimum uncertainty (cf. , LD16, LD84 , and any others will have a wider CI , see "Probit analysis” of Finney, 1947 , 1977). In my experience, always (?) It was better to use the logarithm of dose , and then just convert the 95% CI in the original scale . What is the nature of the other covariates in the model? I allude to the possibility to use multi-model approach... Certainly the Splines are flexible, but the formal parametrics is interpreted easier!

The 0.5 inflection point is a small part of a larger question: the logistic equation is by construction symmetric. And in most derivations of it, the modeled effect has a reason to be symmetric. e.g. as one player wins the other player loses, or the effect responsible for saturation is the same physical effect responsible for the initial growth, etc.... So if there is a reason why the origin of the low X behavior is the same origin as the righ hand behavious or for any other reason the problem is symmetric then you have your justification.

if not, perhaps then the next simplest model is the generalized logistic equation. it has more parameters and you may want to add a constraint so they are not all free parameters. this is probably more desirable than the kludges you added because those are adding shelfs where the first derivative is oscilating back and forth-- that sort of thing tends to create fictional false points of local equilibrium if you are trying to optimize some expectation value of this distribution. the generalize form will break the symmetry but in a smooth way.

Not the answer you're looking for? Browse other questions tagged regression logistic generalized-linear-model binary-data or ask your own question.

19
What are the advantages / disadvantages of using splines, smoothed splines, and gaussian process emulators?
2
How to find the inflection point in logistic regression using R?