I have repeated measures over time from n subjects responding to a daily Likert scale question, so my data is ordinal and longitudinal over a few months. Not all subjects answer every daily survey of course. My goal would be to assess whether there is a statistical difference in survey responses between males and females in my group. 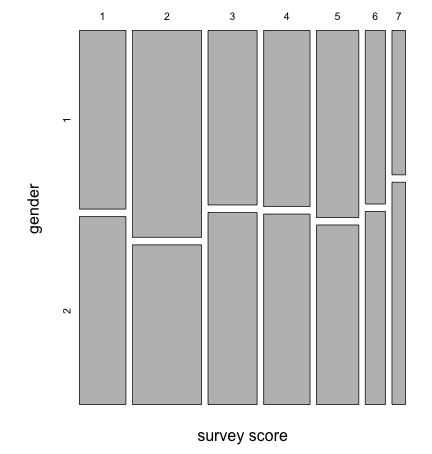 You might guess from the figure that females (gender = 2) choose scores 6 and 7 more often than males, even if the overall number of answers equal to 6 or 7 is small (width of the bars). My first pass at this was to run a Mann-Whitney test for each survey score between the two groups, but I know this violates the assumption of independence. My only other thought was to just find the median score for every user (so collapse a user's responses over time to a single feature equal to his/her median) and run a Mann-Whitney test on the distribution of medians. Does this ignoring of the time dimension matter?

I'm not sure if it's appropriate to think of this also as two time series (male/female) of say the mean survey response, and look for tests that compare the two series?

I don't think I have any good answers for you. But will throw out some ideas:
(1) I wouldn't use the phrase "time series". The phrase "longitudinal data" or "repeat measures", will give you better google search results.
(2) Collapsing the data on the subject level and then comparing responses seem like a good idea to me. This assumes time isn't significant. If time likely is significant longitudinal or repeat measures approach might be better = mixed-effects models. Given the missing data GEE models less likely to be useful.
(3) If you're thinking of going the mixed-effect model route the following posting might be useful. Mixed-effects models can be tricky. With the likert-scale type outcome not sure how I would do it. Likert scale question divided into different group. How to calculate mean of different group?

Not the answer you're looking for? Browse other questions tagged ordinal-data panel-data wilcoxon-mann-whitney-test or ask your own question.