I am trying to read up about AdaBoost from Tibshirani (page 337 onwards), and would appreciate some help in understanding it better.

I am not able to understand what it means to "reapply the algorithm to the weighted observations". Say for example if I am doing 2-class text classification, what am I doing to my observations (document vectors)? How does this "force" the classifier to concentrate on some samples vs others?

A picture may substitute a thousand words ... (stolen from R. Meir and G. Rätsch. An introduction to boosting and leveraging) 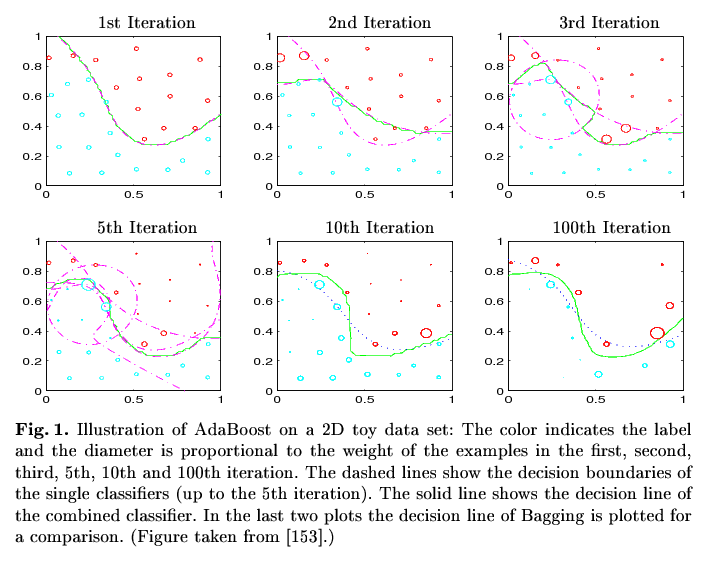 Now it should be more clear how boosting works. Two questions remain about the algorithmic details.

In every iteration, only a sample of the training data available in this iteration is used for training the classifier, the rest is used for estimating the error / the missclassifications.

You can do this in the following ways:

Regarding your document example:

Imagine a certain word separates the classes perfectly, but it only appears in a certain part of the data space (i.e. near the decision boundary). Then the word has no power to separate all documents (hence it's expressiveness for the whole dataset is low), but only those near the boundary (where the expressiveness is high). Hence the documents containing this word will be misclassified in the first iteration(s), and hence gain more focus in later applications. Restricting the dataspace to the boundary (by document weighting), your classifier will/should detect the expressiveness of the word and classify the examples in that subspace correctly.

(God help me, I can't think of a more precise example. If the muse later decides to spend some time with me, I will edit my answer).

Note that boosting assumes weak classifiers. E.g. Boosting applied together with NaiveBayes will have no significant effect (at least regarding my experience).

edit: Added some details on the algorithm and explanation for the picture.

The weights should be applied in calculating of the cost function when training the classifier.

For example, assume our cost function is sum-of-square, weighted sample means when we calculate cost function, each item of sum-of-square will multiply its sample weight(former misclassified samples will have a large weight, so training process of this classifier concentrate more on those samples).

Not the answer you're looking for? Browse other questions tagged machine-learning boosting or ask your own question.

23
How does boosting work?
6
Overfit by removing misclassified objects?

4
Selecting features using Adaboost
2
Values of the weights in Adaboost
4
Adaboost - update of weights
4
The relationship between adaboost and gradient boosting
1
Implementing an Adaboost Classifier
2
How to use AdaBoost weights in Decision Tree
4
Tuning adaboost
0
AdaBoost algorithm question
0
Should I use the results of a previous model in my second model?