How to know if a data follows a Poisson Distribution in R?

I am an undergrad student and I have a project for my probability class. Basically, I have a dataset about the hurricanes that impacted my country for a series of years.

In my probability Book, (Probability and Statistics with R) there is an (not complete) example of how to check if the data follows a Poisson distribution, they begin trying to prove that these 3 criteria are followed: (From my book, page 120 (criteria) page 122-123 example)

But criterion 3 is left "as an exercise".

A- Can someone tell me if there is a more "easy" way to see if my dataset follows a Poisson distribution?

B- Can someone explain me criterion 1 and 3 with some type of example (if it is with R, fantastic)?

Note: Sorry for the long post. Also, I have to convert the data so that I have a table like:

However, what you're talking about there by checking those three criteria isn't checking that the data come from a Poisson distribution by statistical means (i.e. by looking at data), but by assessing whether the process the data are generated by satisfies the conditions of a Poisson process; if the conditions all held or almost held (and that's a consideration of the data generating process), you could have something from or very close to a Poisson process, which would in turn be a way of getting data that's drawn from something close to a Poisson distribution.

But the conditions don't hold in several ways... and the furthest from being true is number 3. There's no particular reason on that basis to assert a Poisson process, though the violations may not be so bad that the resulting data are far from Poisson.

So we're back to statistical arguments that come from examining the data itself. How would data show that the distribution was Poisson, rather than something like it?

As mentioned at the start, what you can do is check whether the data aren't obviously inconsistent with the underlying distribution being Poisson, but that doesn't tell you they are drawn from a Poisson (you can already be confident that they're not).

You could do this check via goodness of fit tests.

The chi-square that was mentioned is one such, but I wouldn't recommend the chi-square test for this situation myself**; it has low power against interesting deviations. If your aim is to have good power, you won't get it that way (if you don't care about power, why would you test?). Its main value is in simplicity, and it has pedagogical value; outside that, it's not competitive as a goodness of fit test.

** Added in later edit: Now that it's clear this is homework, the chances that you're expected to do a chi-squared test to check the data are not inconsistent with a Poisson goes up quite a lot. See my example chi-square goodness of fit test, done below the first Poissonness plot

People often do these tests for the wrong reason (e.g. because they want to say 'therefore it's okay to do some other statistical thing with the data that assumes that the data are Poisson'). The real question there is 'how badly wrong could that go?' ... and the goodness of fit tests aren't really much help with that question. Often the answer to that question is at best one that's independent (/nearly independent) of sample size —— and in some cases, one with consequences that tend to go away with sample size ... while a goodness of fit test is useless with small samples (where your risk from violations of assumptions is often at its largest).

If you must test for a Poisson distribution there are a few reasonable alternatives. One would be to do something akin to an Anderson-Darling test, based on the AD statistic but using a simulated distribution under the null (to account for the twin problems of a discrete distribution and that you must estimate parameters).

A simpler alternative might be a Smooth Test for goodness of fit - these are a collection of tests designed for individual distributions by modelling the data using a family of polynomials which are orthogonal with respect to the probability function in the null. Low order (i.e. interesting) alternatives are tested by testing whether the coefficients of the polynomials above the base one are different from zero, and these can usually deal with parameter estimation by omitting the lowest order terms from the test. There's such a test for the Poisson. I can dig up a reference if you need it.

Here's an example of that calculation (and plot), done in R: 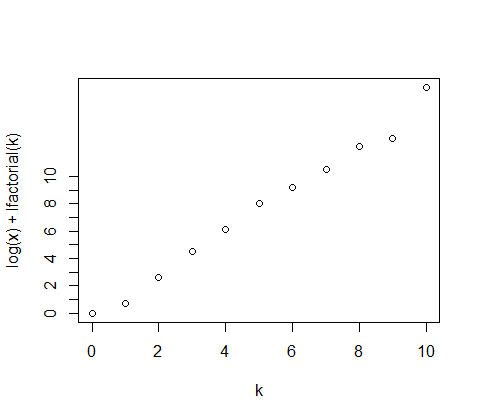 Here's the statistic that I suggested could be used for a goodness of fit test of a Poisson:

Of course, to compute the p-value, you'd also need to simulate the distribution of the test statistic under the null (and I haven't discussed how one might deal with zero-counts inside the range of values). This should yield a reasonably powerful test. There are numerous other alternative tests.

Here's an example of doing a Poissonness plot on a sample of size 50 from a geometric distribution (p=.3): 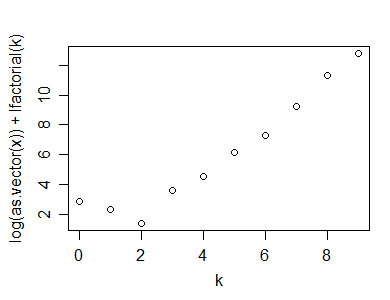 As you see, it displays a clear 'kink', indicating nonlinearity

References for the Poissonness plot would be:

The second reference contains an adjustment to the plot for small counts; you would probably want to incorporate it (but I don't have the reference to hand).

Example of doing a chi-square goodness of fit test:

Aside on performing the chi-square goodness of fit, the way it would usually be expected to be done in a lot of classes (though not the way I'd do it):

1: starting with your data, (which I will take to be the data I randomly generated in 'y' above, generate the table of counts:

2: compute the expected value in each cell, assuming a Poisson fitted by ML:

3: note that the end categories are small; this makes the chi-square distribution less good as an approximation to the distribution of the test statistic (a common rule is you want expected values of at least 5, though numerous papers have shown that rule to be unnecessarily restrictive; I'll take it close, but the general approach can be adapted to a stricter rule). Collapse adjacent categories, so that minimum expected values are at least not too far below 5 (one category with an expected count down near 1 out of more than 10 categories isn't too bad, two is pretty borderline). Also note that we haven't yet accounted for the probability beyond "10", so we also need to incorporate that:

4: similarly, collapse categories on the observed:

5: Put into a table, (optionally) along with the contribution to chi-square $(O_i-E_i)^2/E_i$ and the Pearson residual (the signed square root of the contribution), these can be useful when trying to see where it doesn't fit so well:

Both the diagnostics and the p-value show no lack of fit here ... which we'd expect, since the data we generated actually were Poisson.

Edit: here's a link to Rick Wicklin's blog which discusses the Poissonness plot, and talks about implementations in SAS and Matlab

Edit2: If I have it right, the modified Poissonness plot from the 1985 reference would be*:

* They actually adjust the intercept as well, but I haven't done so here; it doesn't affect the appearance of the plot, but you have to take care if you implement anything else from the reference (such as the confidence intervals) if you do it at all differently from their approach.

(For the above example the appearance hardly changes from the first Poissonness plot.)

Perform the chi-squared goodness of fit test. In case of count data, we can use goodfit() included in the vcd package. Note that if the p value is larger than 0.05, we can not reject h0: the process is a Poisson process. Or else, it is not a Poisson process.

Not the answer you're looking for? Browse other questions tagged r self-study poisson-distribution poisson-process or ask your own question.

5
Testing Poisson process where $X(t)$ is given at fixed times
2
Show with $\chi^2$ and/or QQ plots that data is Poisson distributed (+ realization in Python)
0
How can an intentional timing pattern be demonstrated in temporal data?