Intuition behind the t-distributions density function

I'm studying about Student's t-distribution and I started to wonder, how would one derive the t-distributions density function (from wikipedia, http://en.wikipedia.org/wiki/Student%27s_t-distribution):

where $v$ is the degrees of freedom and $\Gamma$ is the gamma function. What is the intuition of this function? I mean, If I look at the binomial distribution's probability mass function, it makes sense to me. But t-distributions density function makes no sense at all to me...it is not intuitive at all at first sight. Or is the intuition just that it has a bell-shaped curve and it serves our needs?

Thnx for any help :)

The actual derivation is a fairly standard result. Alecos does it a couple of ways here.

As far as intuition goes, I don't have particular intuition for the specific functional form, but some general sense of the shape can be obtained by considering that the (scaled by $\sqrt \nu$) independent chi-distribution on the denominator is right skew: 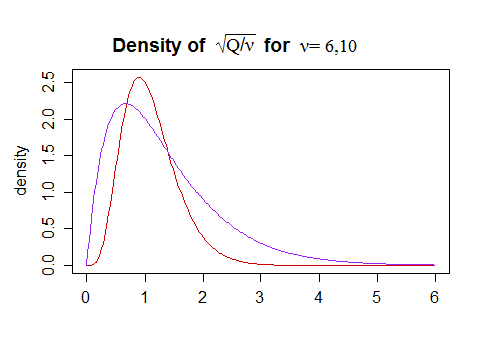 All this means that $t$ values will be (i) more variable, (ii) relatively more peaked and (iii) heavier tailed than a normal. As the df increases, $\sqrt{Q/\nu}$ becomes concentrated around 1, and then $t$ will be closer to the normal. 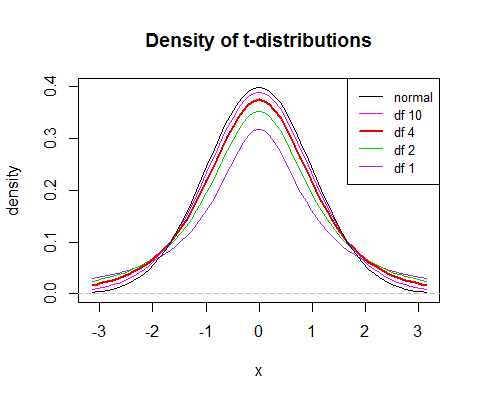 (the 'relatively more peaked' results in a slightly sharper peak relative to the spread, but the larger variance pulls the center down, which means that the peak is slightly lower with lower d.f.)

So that's some intuition about why the $t$ looks as it does.

The answer by Glen is correct one, but from a Bayesian viewpoint it is also helpful to think of the t-distribution as a continuous mixture of normal distributions with different variances. You can find the derivation here:

Student t as mixture of gaussian

I feel that this approach helps your intuition because it clarifies how the t-distribution arises when you don't know the exact variability of your population.

Not the answer you're looking for? Browse other questions tagged probability normal-distribution t-distribution or ask your own question.

27
Student t as mixture of gaussian
2
Why can we use sample variance of the treatment group to estimate population variance of the controls?
2
What's an intuitive explanation of the F-distribution's PDF?