I have trouble figuring out what the range bars in plot.stl exactly mean. I found Gavin's post on this question and read the documentation as well, I understand that they tell the relative magnitude of the decomposed components, but still I am not entirely sure how they work.

data: tiny bar, no scale seasonal: full bar, with scale ranging from -0.6 to 0.2 trend: another tiny bar (seems to be equal to data), no scale remainder: medium sized bar with scale from -1.5 to 0.5

I do not understand what's the basis to relation and why trend has no scale. I tried stl and decompose with identical results for multiplicative and additive methods.

Here is an example to discuss specifics against: 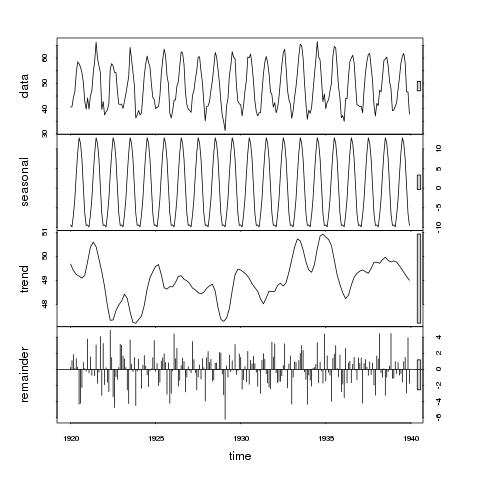 Now consider the trend panel; the grey box is now much larger than either of the ones on the data or seasonal panel, indicating the variation attributed to the trend is much smaller than the seasonal component and consequently only a small part of the variation in the data series. The variation attributed to the trend is considerably smaller than the stochastic component (the remainders). As such, we can deduce that these data do not exhibit a trend.

Now look at another example: 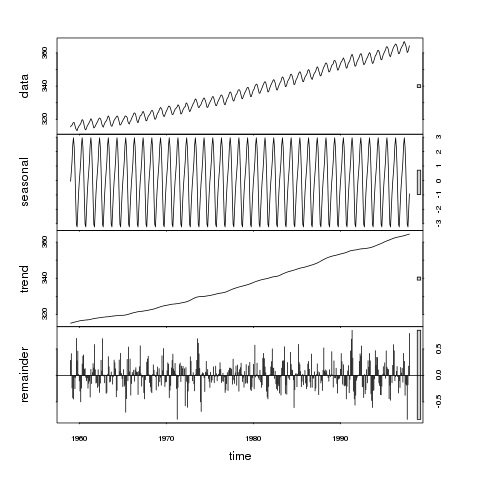 If we look at the relative sizes of the bars on this plot, we note that the trend dominates the data series and consequently the grey bars are of similar size. Of next greatest importance is variation at the seasonal scale, although variation at this scale is a much smaller component of the variation exhibited in the original data. The residuals (remainder) represent only small stochastic fluctuations as the grey bar is very large relative to the other panels.

So the general idea is that if you scaled all the panels such that the grey bars were all the same size, you would be able to determine the relative magnitude of the variations in each of the components and how much of the variation in the original data they contained. But because the plot draws each component on it's own scale, we need the bars to give us a relative scale for comparison.

Does this help any?