What would be a parametric model with properties similar to the Theil-Sen estimator?

The Theil-Sen estimator is a really nifty algorithm that produces a regression line that is relatively insensitive to outliers both in the response variable and the predictor variable. 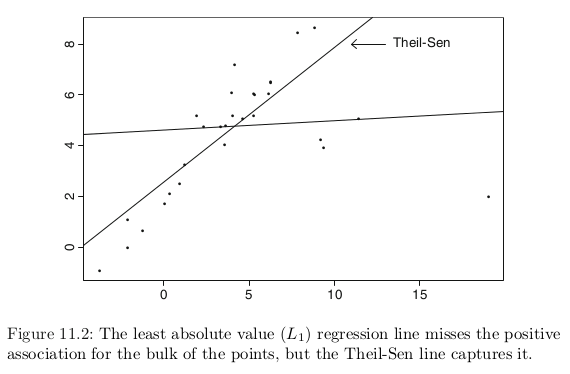 I beleive, the S estimator[1] (and it's algorithm, FastS[2]) is the closest parametric equivalent to the Theil-Sen estimator.

This is because the S estimator explicitly adds a parametric assumption on the distribution of the residuals (through the tuning constant $c$) to get better efficiency at uncontaminated samples.

The FastS algorithm is implemented in the robustbase R package[3] distributed through CRAN.

There are some differences between the two approaches:

These two differences explain why the Theil Sen estimator is essentially deprecated.

One possibility consists of using flexible error distributions. This is, you have a model

where $\epsilon_j\sim F$, and $F$ is a flexible distribution. So, for instance, in order to produce a model that is (relatively) robust to the presence of outliers and skewness, a possible choice for $F$ is a skew-t distribution (there are several types of this).

Not the answer you're looking for? Browse other questions tagged regression estimation robust or ask your own question.

2
Theil–Sen estimator in R with more than one variable?