Can we visualise regression results through diagram?

I read a journal article, in which the authors made a diagram based on regression results (beta weights). Pretty much looks like a path analysis: 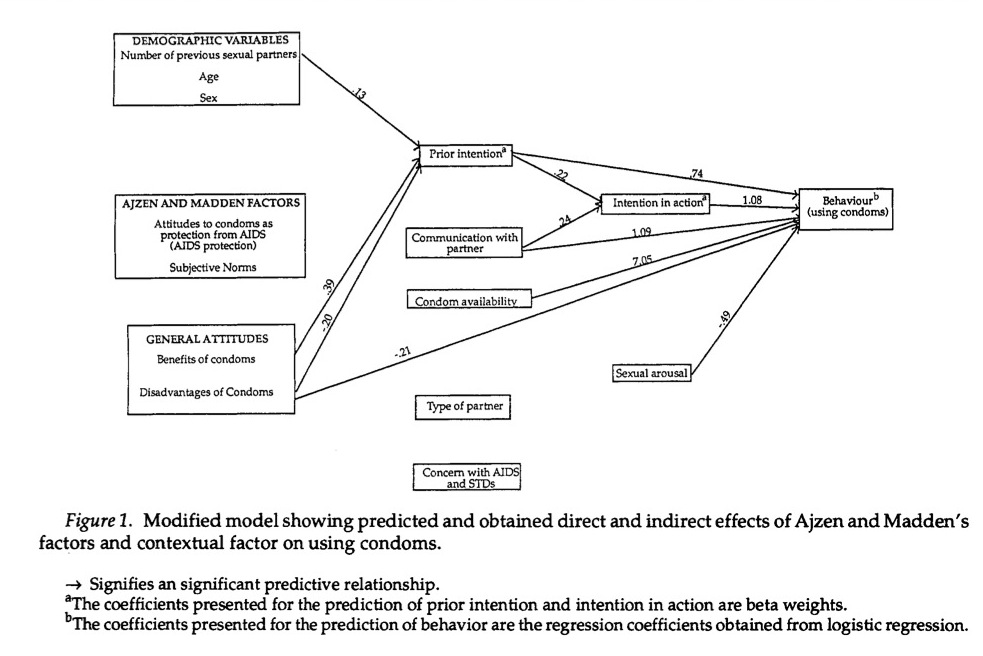 I'm very sure that path analysis/SEM was not employed as can be read from their paper:

Is that OK? I'm not trying to judge the quality of the paper. On the contrary, if that practice is acceptable, I would like to use it in my paper. I wanted to do path analysis, but I'm afraid my sample size (66 subjects) is too small for that analysis, so I used regression instead.

It is a bit tough to discern what is going on without looking at the actual paper, but that appears to be from a Path Analysis or Structural Equation Model, where parameters are estimated for direct and indirect effects of variables on one-another. I tried to find the paper via google scholar, and while I don't have access to the journal, I saw in the abstract that it is examining the theory of planned behavior, for which I understand Structural Equation Modeling is often used.

A great text on structural equation modeling is Principles and Practice of Structural Equation Modeling by Rex B. Kline.

If you search for this method, you might also want to look up the phrase "confirmatory factor analysis".

In doing this analysis, effectively, multiple sets of regressions are run to analyze the relationships between the connected predictor variables themselves, and between the predictor variables and the dependent variable, along the different paths in the model. Thus, the coefficients presented are not simply regression coefficients from a single multiple logistic regression on the entire dataset, as might be inferred from the figure caption. The methodology jibes with what is shown in the figure, and makes logical sense given the information presented and the field that this paper is from.

I hope that helps a bit at least.

I think it's insane.

In theory, I could run any set of univariate (or multiple) regressions and then arrange them any way I please.

While the individual relationships may have been estimated, there is absolutely no evaluation of whether I have then arranged them correctly - i.e. there is no actual test of the theory.

Also, doing it this way ignores the random error in the endogenous variables.

Fortunately, you could, with certain assumptions, use a structural equation model, to estimate all of these regressions in one model, and then evalaute whether the covariance matrix implied by that model is reasonably similar to the observed covraiance matrix.

Path analysis can be viewed as a special case of structural equation modeling (SEM) – one in which only single indicators are employed for each of the variables in the causal model. That is, path analysis is SEM with a structural model, but no measurement model.

FWIW, two lines in Wikipedia's SEM page corroborate the above statement, and I don't see any particular reason to argue with it.

I see from your comments that you're concerned about the use of logistic regression in the final step of the path analysis. This is not a problem. Traditional path analysis proceeds step-by-step in predicting endogenous (dependent) variables, beginning with those predicted by exogenous (purely independent) variables (with no inbound arrows, as with the three sets of variables on the left of your diagram). The first set of endogenous variables can then be used to predict other endogenous variables in subsequent steps involving separate regression analyses to construct a path model. I.e., the logistic regression can be performed after the first two OLS regressions predicting prior intention and intention in action. Modern modeling software can fit the entire model all at once, provide model fit statistics, and accommodate combinations of dichotomous and continuous DVs.

Those fit statistics provide you information about whether your model fits the data sufficiently, as @DLDahly finds lacking in this figure. In its defense, the presence of unconnected measures in this model (e.g., Azjen and Madden factors) suggests the authors attempted to use them as predictors in some way that isn't reflected in the figure itself – but hopefully is in the paper – to test their hypothesized model. Indeed, any set of regressions can be run and arranged as desired, but this is not a problem for purely exploratory research. If a particular, hypothesized model is to be tested, one should report the results for that model – the arrangement of which is not arbitrary – and distinguish these results from any exploratory post-hoc model tweaking. Furthermore, random error in endogenous variables can be identified at each step by noting the fraction of unexplained variance $(1-R^2)$ in each regression model if these are performed separately, or will be identified as the variance estimate for the endogenous variables if the entire model is fit all at once, so it is not ignored necessarily, though this figure does not include this information. Omission of insignificant pathways and error estimates is unfortunately common in SEM reporting, as figures tend to get cluttered quickly.

I also see you're concerned about sample size. Rules of thumb vary regarding recommendations for the minimum number of observations per parameter estimate: I've seen 5, 10, even 20 per estimate recommended. Hence with $n=66$, you could stand a halfway decent chance of fitting 3–13 parameters, depending partly on the quality of your model and the reliability of your measures. I wouldn't tell you not to at least try, but I might recommend crossing your fingers! You never really know what kind of model you can fit until you try (though with really big ones, you can be pretty sure that a small sample = bad news).

Plenty more advice for SEM could be offered depending on the nature of your data (cf. Regression testing after dimension reduction, Factor analysis of questionnaires composed of Likert items), but I'll just offer one more suggestion. One useful alternative for fitting path models with small datasets is partial least squares (PLS) regression. If you're not predicting any one DV with too many IVs, that will help reduce your sample size requirements, because power depends more on that than the overall number of parameters estimated for PLS (Marcoulides, Chin, & Saunders, 2009; Chin & Newsted, 1999). PLS modeling software is freely available through SmartPLS BTW. It can be a little tricky to set up at first, but I've used it myself; it's not half bad!

Not the answer you're looking for? Browse other questions tagged regression path-model regression-coefficients or ask your own question.