How to interpret results after including lags in panel data regression (fixed effects)?

I would like to ask a question about lags I've included however I believe it's better if I first give you some more insight information about my topic.

My hypothesis is ''the positive sentiment spread via Twitter can predict increasing movements on the stock market. So I've gathered approximately 60.000 'positive'tweets over a period from the 8th of October to the 18th of October (intraday, by the hour and excluded the weekend 12 and 13 October). In the named period I gathered tweets from 09:00 am to 04:00 pm about 98 stocks I randomly picked from the S&P 500. For instance, I picked Apple and if I wanted the tweets about the financials of Apple I searched for $AAPL (since when a tweets is sent mentioning a firm's financials the ticker symbol is used preceded by a dollar sign). The program I used immediately labeled it as a positive or negative tweets.

To clarify, I looked at the quantity of tweets that was sent by the hour. In total I have 72 periods for 97 firms making it 6984 observations.

I created a dummy variable since I wanted to look at the strength of social network instead of the original news media. So for all the firms that were explicity in the (financial) news over the period 10-08-2013 to 10-18-2013 I created a dummy.

After collecting the tweets, I collected the matching stock quotes. Since they were not stationary I used the first differences and created panel data.

After doing the Hausman test I concluded that I had to use the fixed effects model. But after running the regression, I came to the conclusion that I have lots of serial correlation. So I included three lags for the dependent variable (returns) and independent variable (tweets) in order to get my Durbin - Watson statistic above 2. As shown below. 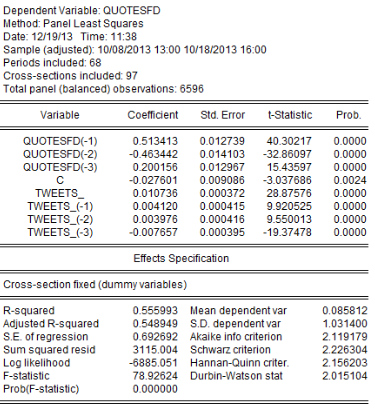 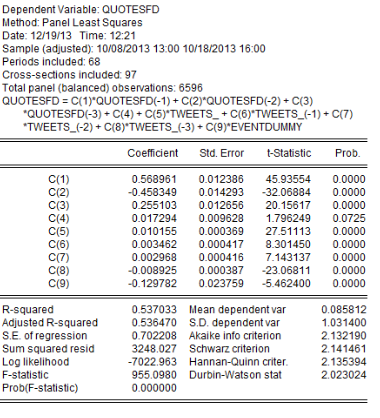 However, I find it very difficult to interpret the results especially since the t value are so high. I understand that it is difficult to draw a general conclusion with only one independent variable but could someone help me? What can I conclude from the regression with inclusion of the lags?

Thanks in advance for your time, very much appreciated!

Browse other questions tagged regression panel-data fixed-effects-model lags or ask your own question.