What is the difference between conditional and unconditional quantile regression?

If I understand correctly, part of the problem is that which covariates are included in $X_i$ has an effect on the ranking variable $u_i$ because inclusion of covariates splits the error into observed and unobserved components. I just cannot quite understand why this causes problems.

Set-up
Suppose you have a simple regression of the form $$\ln y_i = \alpha + \beta S_i + \epsilon_i $$ where the outcome are the log earnings of person $i$, $S_i$ is the number of years of schooling, and $\epsilon_i$ is an error term. Instead of only looking at the average effect of education on earnings, which you would get via OLS, you also want to see the effect at different parts of the outcome distribution.

1) What is the difference between the conditional and unconditional setting
First plot the log earnings and let us pick two individuals, $A$ and $B$, where $A$ is in the lower part of the unconditional earnings distribution and $B$ is in the upper part. 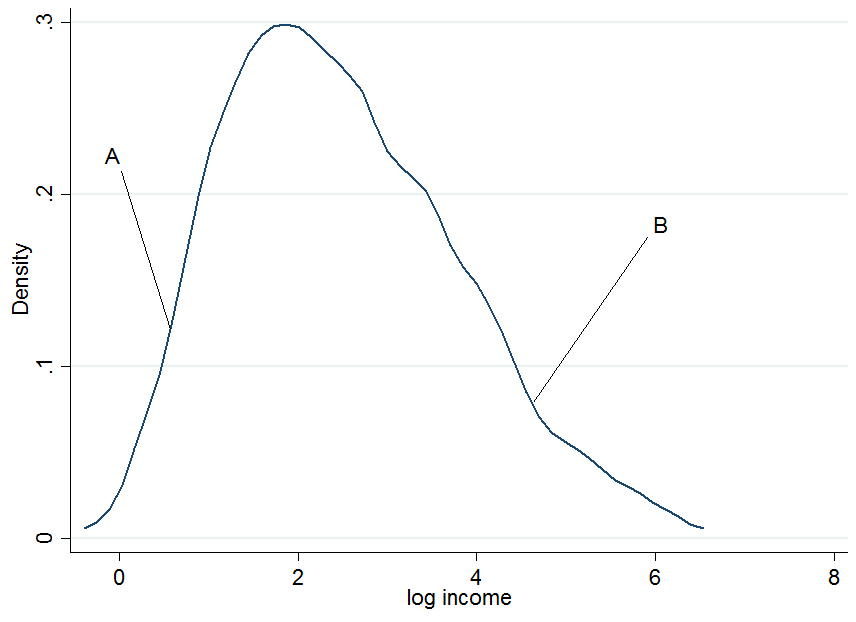 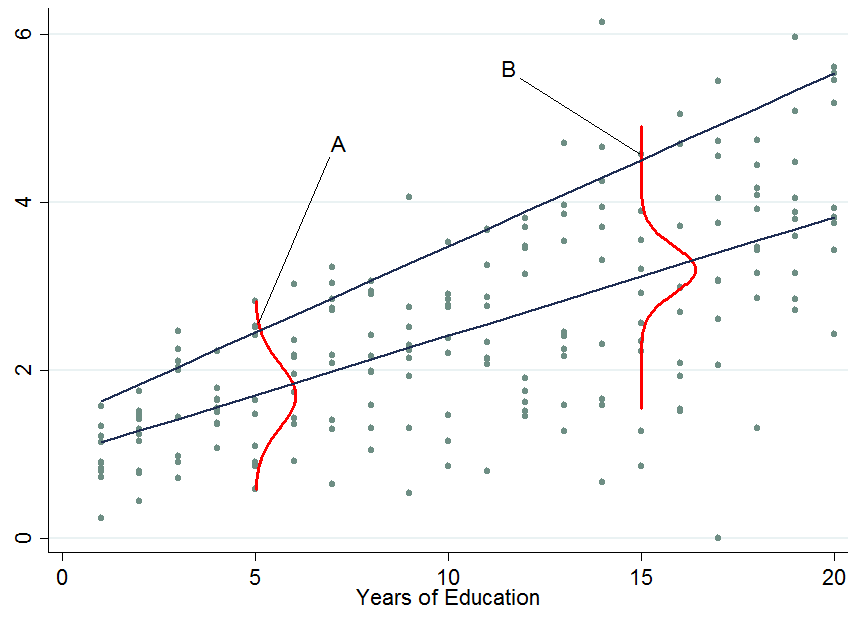 You already said that with OLS we can go from $E[y_i|S_i] = E[y_i]$ by applying the law of iterated expectations, however, this is a property of the expectations operator which is not available for quantiles (unfortunately!). Therefore in general $Q_{\tau}(y_i|S_i) \neq Q_{\tau}(y_i)$, at any quantile $\tau$. This can be solved by first performing the conditional quantile regression and then integrate out the conditioning variables in order to obtain the marginalized effect (the unconditional effect) which you can interpret as in OLS. An example of this approach is provided by Powell (2014).

2) How to interpret quantile regression coefficients?
This is the tricky part and I don't claim to possess all the knowledge in the world about this, so maybe someone comes up with a better explanation for this. As you've seen, an individual's rank in the earnings distribution can be very different for whether you consider the conditional or unconditional distribution.

For unconditional quantile regression
Those are like the OLS coefficients that you are used to interpret. The difficulty here is not the interpretation but how to get those coefficients which is not always easy (integration may not work, e.g. with very sparse data). Other ways of marginalizing quantile regression coefficients are available such as Firpo's (2009) method using the recentered influence function. The book by Angrist and Pischke (2009) mentioned in the comments states that the marginalization of quantile regression coefficients is still an active research field in econometrics - though as far as I am aware most people nowadays settle for the integration method (an example would be Melly and Santangelo (2015) who apply it to the Changes-in-Changes model).

3) Are conditional quantile regression coefficients biased? No (assuming you have a correctly specified model), they just measure something different that you may or may not be interested in. An estimated effect on a distribution rather than individuals is as I said not very interesting - most of the times. To give a counter example: consider a policy maker who introduces an additional year of compulsory schooling and they want to know whether this reduces earnings inequality in the population.

The top two panels show a pure location shift where $\beta_{\tau}$ is a constant at all quantiles, i.e. a constant quantile treatment effect, meaning that if $\beta_{10} = \beta_{90} = 0.8$, an additional year of education increases earnings by 8% across the entire earnings distribution.

When the quantile treatment effect is NOT constant (as in the bottom two panels), you also have a scale effect in addition to the location effect. In this example the bottom of the earnings distribution shifts up by more than the top, so the 90-10 differential (a standard measure of earnings inequality) decreases in the population. 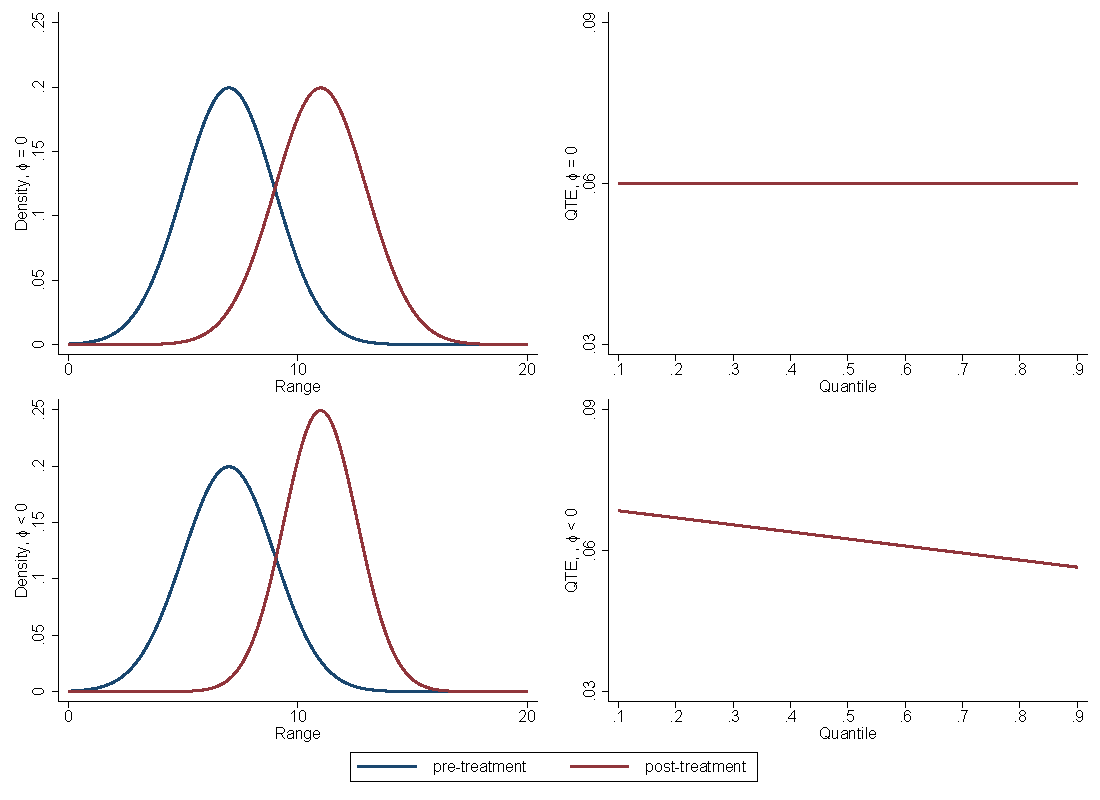 You don't know which individuals benefit from it or in what part of the distribution people are who started out in the bottom (to answer THAT question you need the unconditional quantile regression coefficients). Maybe this policy hurts them and puts them in an even lower part relative to others but if the aim was to know whether an additional year of compulsory education reduces the earnings spread then this is informative. An example of such an approach is Brunello et al. (2009).

If you are still interested in the bias of quantile regressions due to sources of endogeneity have a look at Angrist et al (2006) where they derive an omitted variable bias formula for the quantile context.

In addition to the excellent answer provided by @Andy. You may want to check out:

Not the answer you're looking for? Browse other questions tagged quantile-regression or ask your own question.