There is something that I am doing wrong in the exercise below and I would appreciate some help figuring it out.

Now for question 2, my thoughts were to transform these probabilities using the result from question 1, namely that $\frac{2}{3} W \sim \chi^2 \left(30 \right) $. Hence, unless I have made a horrible mistake here:

This is a common issue with the gamma distribution - there are two different common parameterizations, both reasonably widespread, and if we're not careful, we can think we're dealing with one when we're actually doing the other. (Actually, there's a third paramaterization that comes up a lot when dealing with gamma GLMs, the shape-mean parameterization, but that one is usually more obvious when it occurs.)

[While it comes up a lot when dealing with software, it's not simply a software issue, because the issue often happens between humans as well.]

As it happens, R is a particular culprit with this kind of issue, the help for the collection of gamma distribution functions seemingly going out of its way to muddy the water (I'm using 3.0.2 at the time of writing, but the issue has been there for ages).

My guess is you might be calling the pgamma function in R with unnamed arguments, but supplying shape and scale arguments, like so ...

... when R defaults to shape and rate arguments.

When in doubt, draw. Here's what you want to be calculating with: 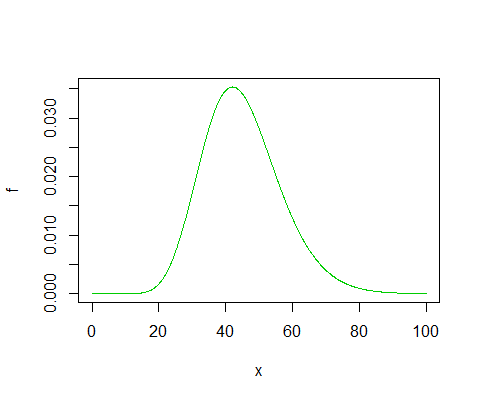 Here's the actual density I suspect you're calculating with: 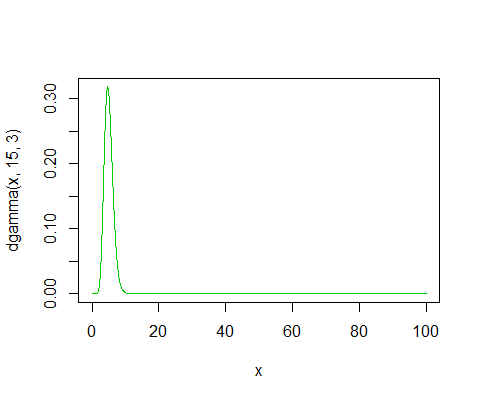 The R help is, unfortunately, less than clear -- even actively misleading. The sentence under "Description" implies that the supplied parameters are shape and scale -- and the description of rate under "Arguments" confirms the impression(!) -- but the argument list in the function itself isn't ambiguous, if non-obvious to a novice user:

Do you see how the scale defaults to a function of whatever is specified for the rate? If you just supply two unnamed arguments after the q, they are the shape and the rate, and then scale is obtained by taking reciprocals.

Which is to say, you need to use a named argument to get what you want:

When there is any potential for doubt, you should probably name your arguments anyway, to make them explicit to human readers.

Not the answer you're looking for? Browse other questions tagged r distributions self-study confidence-interval gamma-distribution or ask your own question.