Formatting graphs: when is it appropriate to use a fill under a line graph?

This is a data visualisation question - I hope it's okay to ask this here.

When is it appropriate to use a fill under a line graph for a time series, like the graph below? (which is showing ping times over a day)

I guess it's more common to use a plain line, with no fill beneath, but is it OK to use a fill for visual variety?

I'd be particularly interested in knowing about any perceptual research on the topic, or any style guides.

There is a bit of an art to balancing aesthetic and informative aspects of a graphic. Prominent visualization consultant/authors like Edward Tufte and Stephen Few choose a minimal aesthetic that avoids distraction from the informative parts of the graph. However, for some audiences a small amount of flourish is justified -- see Alberto Cairo's journalistic application of data visualization, for instance.

The perceptual research angle is that every graphic element communicates a message, some that we aren't consciously aware of because our visual cortex deals with it ("pre-attentive processing"). Extra elements, even redundant ones, can result in extra processing. The appropriate graph depends on the message to be communicated and the audience.

To your specific question, a connected line emphasizes a trend (and variation from a trend). The filled area emphasizes deviation from the baseline. A bar chart or needle chart would emphasize discrete events deviating from a baseline.

The graphic's context is also important. If you have a grid of tightly packed graphs, the fill will help associate each line with its baseline.

Finally, another consideration for adding redundant graphic elements/florishes is that it makes it harder to extend the graph with more informative elements. For instance, you might want to highlight special values, overlay other trend lines or overlay bands, such as in the following mock-up.

The previous two answers cover the main important points, but there are a few things that should still be mentioned.

First, I should say that I disagree with the extreme minimalist approach to graphing -- that all redundant ink must go. Distracting, non-meaningful variation should go. But a solid area versus a single line can catch the eye better and communicate more at a glance. And as you say, it can add "visual variety".

However, as @xan points out, that quick glance also interprets an area differently than a line, in ways partially subconscious.

An area graph implies a total quantity accumulating as you proceed along the x-axis. If you compare two graphs, and one has a larger area filled in, your glance will tell you that it has a greater total regardless of the start and end values.

In contrast, a line graph shows a changing value. The focus is on the change in position from one point to the next, not on the total accumulated.

So when should you use an area graph?

The idea is that, when reading the graph, if you take two points on the x-axis, the area shown between them should represent an actual amount of something accumulating in that range. For this reason, if you values include negative amounts I'd recommend using opposite colours for negative and positive areas to emphasize that they cancel out in the total.

When should you not use an area graph?

With those guidelines in mind, your ping graph can be interpreted two ways.

On the one hand, if you think of the ping speed as a as a single variable that changes over the course of the day, then a simple line chart would be most appropriate. 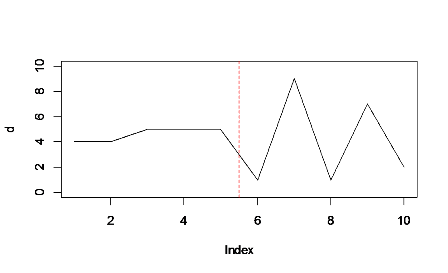 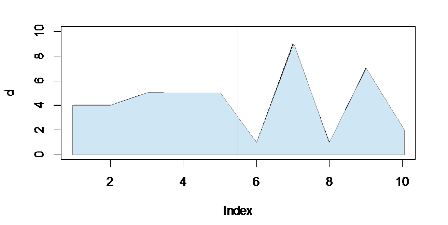 The cumulative total is slightly greater in the first half of the graph (left of the red line) than the second, even if the peaks hit higher max values on the right. Filling in emphasizes that solid block on the left, so that it balances better against the peaks.

(Forgive the poor image quality -- couldn't figure out how to get R to do an area graph! Had to export and edit separately.)

A couple more points to consider:

As mentioned in a comment, an underfill is largely inappropriate if the x axis is not at a natural y zero point. This might be because the y axis is scaled to start at a number other than zero, or because the units used do not have a natural zero interpretation (e.g. Kelvin has a natural zero, while Celsius does not.)

Secondly, a case when an underfill is particularly valid is if the data themselves could be considered underfilled. For example, a line chart of the height of a mountain makes sense to be underfilled, the fill colour represents earth, while unfilled represents air.

A related example might be count data. If we stacked all the individuals at each x point, we would get a bar chart. If interpolating between the bars makes sense we would end up with a line chart with an underfill.

9
Good line color for "threshold" line in a time-series graph?
6
Vertical line graphs in R
6
Formatting graphs and figures: why and when is it bad to include horizontal lines?
1
Multiple variable comparison line graph SPSS
13
Simple example that shows the advantages of Bayesian Model Averaging (BMA)
1
Plotting two graphs of unequal time length in 1 graph
2
Name of combined pie chart and line graph
4
What would be an appropriate Y axis when plotting several functions shifted one under another?
1
Would a line graph be appropriate to display this specific data?
2
Displaying nominal data with a line graph