I was looking at Bayesian rule, and I was thinking it might be possible to use a likelihood ratio to predict the bus reaching a stop. But I'm not sure if this is the right way to look at this problem. I'm not a statistician, so all the jargon to choose the right way to model this problem makes me nervous. I would like to get your advice on this. I'm willing to put in time to learn, but I don't want to spend a few days to find out this might not be the way to look at it in the first place.

I think my problem is limited understanding of various probability based modelling techniques. If my statement of my problem needs any clarification, or any section needs more detail, I'm happy to add it. Any help would be much appreciated. Cheers!

UPDATE: Sorry guys—these are buses that take employees to work and the other way around. So these buses have the liberty to avoid a stop if there are no passengers; the buses can even avoid the last two stops, for example, when taking the passengers from work to home, they usually go back to a different place to pick people from. I have GPS data from which I can check if a bus reached a stop, and there's also data for route configuration. In each route there is data about if a stop is mandatory as well. With this data in hand I'd like to predict if a bus will reach a certain stop. Please let me know if you require further information. Thanks!

It seems like simple logistic regression would work well. Hopefully this matches well to the data you have. I've tried to lay off jargon as much as possible.

Let's confine our analysis to a single bus route for simplicity (you can simply repeat this procedure for other routes). The dependent/predicted variable you are trying to measure is a binary variable $y$; that is, $y=0$ if the bus misses the stop, and $y=1$ if the bus makes the stop.

Now you want to develop a series of predictor/independent variables that you can use to predict $y$ for future observations. AccidentalStatistician has mentioned a few possibilities. Here are a few simple ones:

The important step is figuring out what you think might be important in your data and distilling it into some simple form (e.g. zeros and ones).

Once you have your data in this form, you can run a logistic regression to predict the probability that $y=1$ for any observed values of $x_1, x_2, ..., x_p$ (where $p$ is the number of independent variables). If you have just one independent variable, $x$, the result will look something like this (image source) 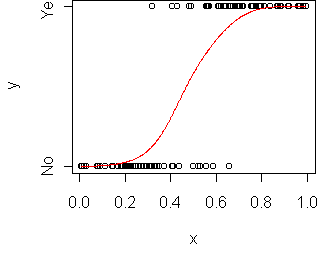 The following source explains how to fit a logistic model in R: LINK. I recommend the following textbook as an introduction to logistic regression and multiple linear regression (which has pretty similar motivations) LINK. And the following book for advanced understanding of logistic regression and other classification methods: LINK. This last reference will cover a lot of really important methods for variable selection -- it is really easy to come up with too many independent variables and over-fit your data: LINK. Don't do this!

In order to predict any outcome (bus stop in your case), you need some information other than the outcome you want to predict. These variables are often called predictors / covariates / independent variables.

So the answer to your question depends on what information you have.

1. If, the bus GPS signal and door open signal are the only ones you have, your predictor can include

If real-time, you can also use the previous stop information on the same route. The method for real time modelling is Markov Chain Monte Carlo but you can use regression if that is beyond your knowledge.

2.If you have other information such as

they can also be used in a regression as predictors.

In short, you need Markov Chain Monte Carlo if you know enough statistics and logistic regression otherwise. Your predictors will be anything you think is relevant.

I'm assuming, from your description of your data, that you effectively have a perfect record of where the bus opens its doors. So, for predicting what a bus will do at a particular stop, your data is what the bus did on previous shifts (entire routes), and what the bus did for previous stops on the current shift.

For the non-mandatory stops, the simplest model would be to assume the probability of the bus opening its doors at a stop is independent of what happens at other stops. In that case each stop would have a simple likelihood ratio, since it's equivalent to the likelihood for, say, seeing heads when flipping a biased coin.

The next step would be a model where the probability of opening doors at a stop depends on what the bus did at stops earlier along the route. For that you'd want some historical data to look at, so you can look for correlation between stops.

For making the model more complete, it depends on the specifics of your problem.

I've assumed above, for example, that what the bus does on different shifts are independent, but if it does several shifts, at different times of day, that might not be the case. Then you'd have to account for what time of day it is, if you've got measurements for that.

I've also assumed there's only one bus, but if two buses happened to turn up at the same stop soon after each other, that would lower the probability the second bus opens its doors there. So then you'd have to account for what other buses are doing.

In your question, you need to describe what data you have that are complete, jagged, and missing.

Overall, you should think about assembling your data to determine what is missing, what is unique, what is repeated, what is assymetric and jagged (different). Then use a "divide and conquer" method to reduce your large problem into many small problems -- then solve each small problem.

Not the answer you're looking for? Browse other questions tagged predictive-models forecasting or ask your own question.

0
How do I calculate projected figures for the next year based on past performance?
0
Time series analysis for predicting a binary outcome
3
Is there a non-boostrap way to estimate confidence intervals for Kernel regression predictions?
7
Predictive maintenace model to identify indication of failure before it happens
2
Error measure that take the time of prediction into account?
2
Model for predicting chance of winning in variable count of opponents
1
Predicting walking routes using PyTorch