But a Euclidean distance between two data points can be represented in a number of alternative ways. For example, it is closely tied with cosine or scalar product between the points. If you have cosine, or covariance, or correlation, you can always (1) transform it to (squared) Euclidean distance, and then (2) create data for that matrix of Euclidean distances (by means of Principal Coordinates or other forms of metric Multidimensional Scaling) to (3) input those data to K-Means clustering. Therefore, it is possible to make K-Means "work with" pairwise cosines or such; in fact, such implementations of K-Means clustering exist. See also about "K-means for distance matrix" implementation. 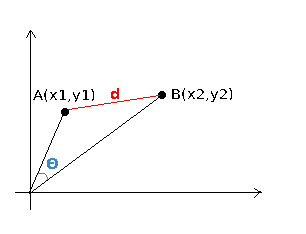 15
Cosine Distance as Similarity Measure in KMeans
5
Is there a situation when one would use L1 norm over L2 norm in k-means algorithm?
2
Why is it bad to use Pearson distance in K-means clustering?
2
Is pairwise distance matrix useful to k-means?
1
is k-means generalizable at any distance?
25
Perform K-means (or its close kin) clustering with only a distance matrix, not points-by-features data
56
How to select a clustering method? How to validate a cluster solution (to warrant the method choice)?
49
Hierarchical clustering with mixed type data - what distance/similarity to use?
29
Clustering a correlation matrix
21
How to understand the drawbacks of Hierarchical Clustering?
See more linked questions