I have a call center data (such as one below) that has call data collected every 15 minutes. For a day the periodicity is 96 and for a week the periodicity is (7 x 96 = 672). If I would like to forecast this data I can use models that handle multiple seasonality such as DSHW, TBATS and BATS in R forecast package. As you can imagine having a periodicity of 96 and 672 would require tremendous amount of computational resource and not very many techniques can handle such a long periodicity.

I recently came across an excellent article by Shen that uses Singular Value Decomposition to reduce the dimension/periodicity of the time series, so we could have a parsimonious model and the model would be more efficient/require less computational resource. I'm open to other methods such as discrete wavelet transformation (dwt), discrete Fourier transformation (dft) etc.,

You might want to consider forecastable component analysis (ForeCA), which is a dimension reduction technique for time series, specifically designed to obtaina lower dimensional space that is easier to forecast than the original time series.

Let's look at an example of monthly sunspot numbers and for computational efficiency let's just look at the 20th century. 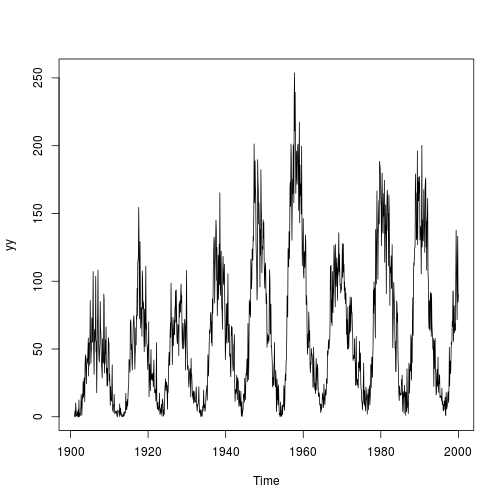 In R you can use the ForeCA package to do the estimation. Note that this requires the multivariate spectrum of a $K$-dimensional time series with $T$ observations, which is stored in a $T \times K \times K$ array (one can use symmetry/Hermitian property to half the size). Hence it takes considerably longer to compute than iid dimension reduction techniques (such as PCA or ICA).

So here we take the 24-dimensional time series of embedded sunspot numbers and try to find a 6-dimensional subspace that has interesting patterns that can be easily forecasted. 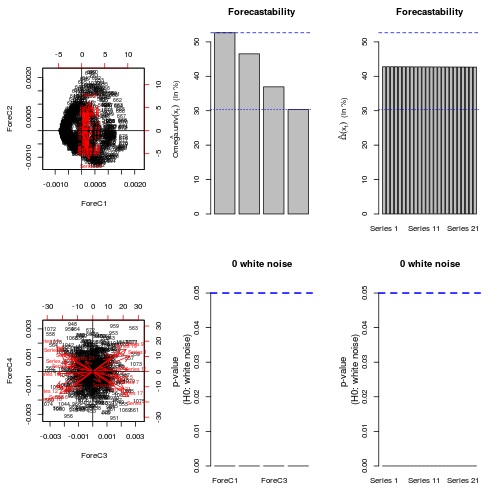 The biplot shows that the first component all points in the same direction, which is telling us that this component will be the overall/average pattern. The barplots on the right show how the forecastable components (ForeCs) have indeed decreasing forecastability, and the first component is more forecastable than the original series. In this example, all original series have the same forecastability, as we used the embedding. For general multivariate time series, this is not the case. 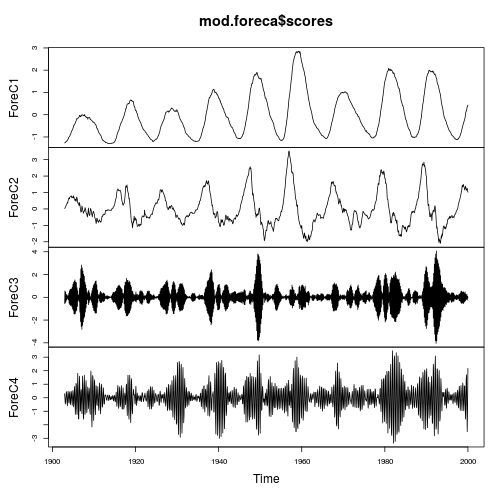 Indeed, the first component is more forecastable than the original series, since it is less noisy. The remaining series also show very interesting patterns, that are not visible in the original series. Note that all ForeCs are orthogonal to each other, i.e., they are uncorrelated.

The spectrum of each series also gives a good idea of the different ForeCs [sic!] in sunspot activity. 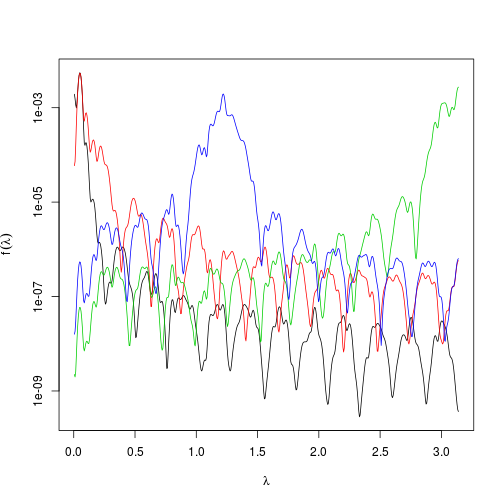 We see data like this from a number of fast food franchises that want to predict demand in 15 minute intervals. You can construct a daily model that incorporates day-of-the-week effects, weekly effects, monthly effects , week of the-month effects , day-of-the month effects, weekend effects , holiday lead and lag effects , changes in level effects , changes in trends effects, change in day-of-the-week effects , autoregressive effects and pulse effects along with any user-specified predictor series. The daily forecasts can then be used to help forming 15 minute interval forecasts finalizing in a required reconciliation between daily forecasts and 15 minute forecasts. AUTOBOX (http://www.autobox.com) is a tool that can be helpful in this regard while other major software vendors come up short as do all the "free solutions" to this very interesting problem. In terms of full disclosure , I had a hand in developing some of these solutions for Automatic Forecasting Systems, the makers of AUTOBOX. You might try your hand at doing this in R , if you have enough time and patience to program the required steps.

Not the answer you're looking for? Browse other questions tagged time-series forecasting dimensionality-reduction svd wavelet or ask your own question.