I'm unclear how the shrinkage parameter works in Adaboost.

I understand the concept of shrinkage in the theoretical sense related to ordinary least squares, but I'm not sure how to interpret this parameter in relation to Adaboost.

Basically the idea is to slow down learning, allowing to dramatically reduce overfitting. That is, if thinking about it in terms of gradient descent (which Adaboost just is, being a particular case of Gradient Boosting), using no shrinkage performs descent in the direction & amplitude given by the training set. In many cases, this may not be the optimal direction and will cause early overfitting.

Slowing down learning is also the idea behind boosting itself, as using weak predictors manages to reach lower generalisation error by not overfitting early, as happen with simple decision trees for instance.

This post is based on the assumption that the AdaBoost algorithm is similar to the M1 or SAMME implementations which can be sumarized as follows:

From the above algorithm we can understand intuitively that

From this intuition, it would make sense to see a trade-off between the parameters $L$ and $M$. Increasing one and decreasing the other will tend to cancel the effect.

An example on a toy dataset

Here is a toy dataset used on a different question. Plotting the final decision boundary for different values of L and M shows there is some intuitive relation between the two. 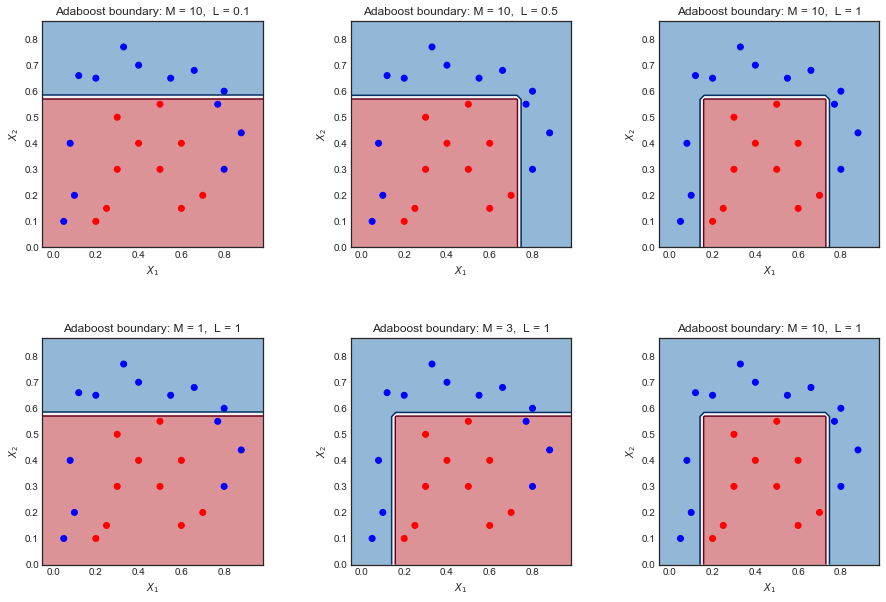 Not the answer you're looking for? Browse other questions tagged r machine-learning boosting regularization adaboost or ask your own question.

14
When would one want to use AdaBoost?
3
What to do when weak classifiers are almost identical in AdaBoost?
5
How many AdaBoost iterations?
1
Understand Adaboost feature selection
2
Why regularization/shrinkage method works for p>n?
1
Why AdaBoost works exactly the way it does
6
what does regularization mean in xgboost (tree)
1
AdaBoost assumption of weak classifier