Are the results of OLS linear regression correct?

How could we know if the coefficients and R-Squared in the following table are reliable and are correctly computed or not? Is there any way to validate the correctness of the results, considering that we do not have access to the data set? 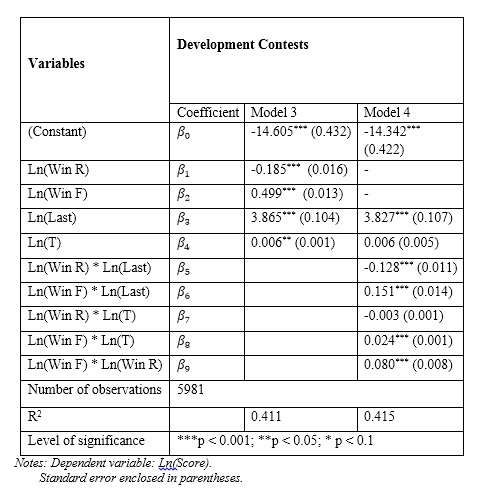 The descriptive analysis of the original variables is as follows, but in regression they transformed variables!

In this specific case, with the extra details about the data, some questions may still be raised about the model.

Although without the data you cannot check the calculations, I'd suggest that the quality of the analysis might fairly be guessed by the extent to which the authors discuss

More personally, I would hope to see, as diagnostic of careful work, graphs as well as tables to give a clear picture of data and/or results. Habits and traditions vary, and in some fields graphs are avoided on various grounds, say supposed lack of space, lack of an obvious graph to show off a complicated model, academic snobbery, a principle that graphs should not repeat tables, or prejudice that graphical inspection is a form of data snooping. But it is rare that authors don't have scope for, minimally, alluding to graphical exploration of their data. The lack of graphs or of evidence of graphical work often hints at superficial, naive or mechanistic work.

In short, be particularly sceptical if models just are presented without a background story or critical discussion.

A very personal, and very minute, detail is that authors who allow "Ln" to appear in print rather than "ln" lack mathematical taste, even when it starts a sentence, but it is possible that this should be blamed on reviewers, editors, or publishers' staff.

You cannot see that from the table or the descriptives.

You can look at the paper and see what they did (or at least what they tell you they did), and see if that makes sense.

The ideal way is to replicate the study, but you would need access to the data. This will depend on the willingness of the original authors to share their data with you. There are good reasons for not being able to do that, e.g. privacy laws may forbid it in some countries. There are some less good reasons but still understandable for not sharing, e.g. the data is such a state that it needs some work to make it useful to other persons, and the original authors just don't have time right now. There are some bad reasons for not sharing the data, e.g. the analysis is so sloppy (or worse) it won't stand a chance of being reproduced.

In addition to the other issues, this table is NOT the way the output would appear in SPSS Statistics, so you have no way of knowing whether there are typographical errors without the original output, so if your life depends on it, you need to be cautious.

Not the answer you're looking for? Browse other questions tagged spss multiple-regression or ask your own question.

2
Multinomial logistic regression low classification rate
3
Why there are two different results?
6
Which residuals to analyse when dependent variable is transformed?