Why do we need autoencoders?

What is the usefulness of this model? What are the benefits of trying to reconstruct some output elements, making them as equal as possible to the input elements? Why should one use all this machinery to get to the same starting point?

Auto encoders have an input layer, hidden layer, and an output layer. The input is forced to be as identical to the output, so its the hidden layer we are interested in.

So the purpose of auto encoders is dimensionality reduction, amongst many others.

I see it as a kind of "regression by neural networks" where you try to have a function describing your data: its output is the same as the input.

Maybe these pictures give you some intuition. As commenter above said auto encoders tries to extract some high level features from the training examples. You may see how prognostication algorithm is used to train each hidden level separately for the deep NN on the second picture. 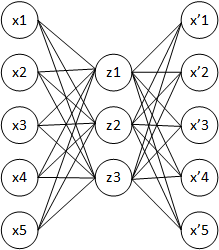 Pictures are taken from Russian wikipedia.

In terms of ML, features are gold. Learnt features that use as little data as possible but contain as much information as possible enable us to complete many tasks. Auto encoding is useful in the sense that it allows us to compress the data in an optimal way (that can actual used to represent the input data, as observed by the decoding layer).

Now that we have these features, we are able to complete many different tasks - for example we can use it as a very good starting point for supervised learning tasks.

Not the answer you're looking for? Browse other questions tagged neural-networks autoencoders or ask your own question.

3
What exactly is an autoencoder?
1
Why do we need Auto-encoder? How is it useful in real life implementation?
31
What are variational autoencoders and to what learning tasks are they used?

5
Architecture of autoencoders
1
How to extract the features making up the hidden layers in Autoencoders
5
Activation functions for autoencoder performing regression
0
How to reconstruct negative acceleration values using a simple autoencoder?
7
Why are the tied weights in autoencoders transposed and not inverted?
0
Why does auto-encoder best suited for the job of anomaly detection?