What is the relation between the estimated standard deviation of a normal distribution and the scale of a t distribution when applied to normal data?

If I generate normally distributed data and then use this data to estimate the parameters of a normal distribution using, say, maximum likelihood I would expect the estimated standard deviation to be close to the true standard deviation given enough data. If I instead use this normally distributed data to estimate the parameters of a t distribution with a fixed DF the scale does not approach the true sd. There should, however, exist a functional relationship between the SD of the data and the scale of the t-distribution. I haven’t manage to figure this relationship out so my question is:

What is the relation between the estimated standard deviation of a normal distribution and the scale of a t distribution when applied to the same (truly) normally distributed data?

I've done some numerical simulations, where I generated normally distributed data, fitted a normal and a t with a fixed DF and looked at the ratio between the estimated SD of the normal and the scale of the t. It definitely looks like there is a relation, but it would be nice to have a formula for this :)

Here is the simulation in R code: 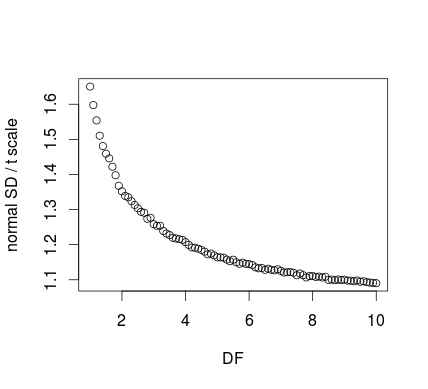 One way of transforming the scale of the t distribution so that it becomes more similar to the SD of the normal data is by taking the Interquartile range (IQR) of the estimated t distribution and then dividing the IQR by 1.349 which, if the IRQ would have come from a normal distribution, would have resulted in the SD of that normal. This transform feels a bit like a hack to me and does not make the discrepancy go away completely as seen below. 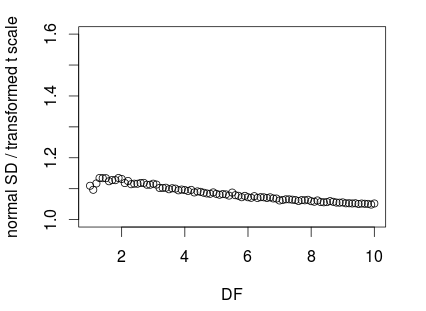 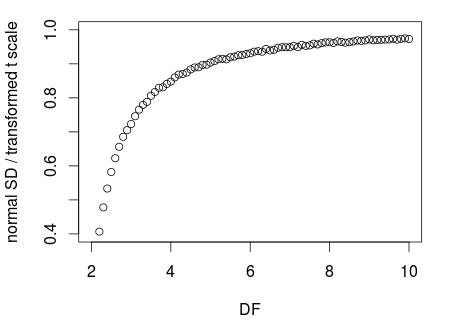 This question has now been answered by Tom Minka as an answer to one of my other questions: What would a robust Bayesian model for estimating the scale of a roughly normal distribution be?.

I believe this question should still not be deleted, it's still a different question even though the answer is the same :)

Not the answer you're looking for? Browse other questions tagged normal-distribution standard-deviation t-distribution or ask your own question.

33
What would a robust Bayesian model for estimating the scale of a roughly normal distribution be?