Combination of Data from Two Normal Samples not Normal?

I have two sets of data that hypothesis tests have shown to be normal and from the same distribution. I'm using MATLAB and for the way they give p-values, higher p-values suggest a better goodness-of-fit, as I understand it. I want to combine the two data sets to get the parameters for the combined data set. However, when I run a hypothesis test on the combined data set, hypothesis tests either reject the null assumption of Normality or come very close as seen by the test statistics. I've been looking for an explanation but have no idea where to start. Could anyone shed some light into this?

If you're talking about a test of the null hypothesis that your sample data come from an exactly normal distribution, you'll probably want to see this question: Is normality testing 'essentially useless'?

Whether your data are too different from a normal distribution for your intended purposes is another question. The hypothesis tests you're using probably can't answer it for you by themselves: their outcomes will depend on your sample size, but won't take into account the sensitivity of whatever other analyses you have planned, among other reasons. You would probably get a better idea of how important this issue is by studying the sensitivity of your planned analyses to violations of the normality assumption; some really aren't very sensitive to the usual kinds of minor violations that are present in approximately normal data. You might get better sense of how non-normal your data are from a Q-Q plot, as @Glen_b suggested; knowing just how much non-normality is too much can still be difficult to tell from these plots though.

If you have time, or if your data are particularly problematic, you might want to look into robust alternatives to any other analyses you plan to run. This might even be one of the shorter routes to avoiding validity problems while ignoring the idiosyncrasies of your distribution, but bear in mind that those idiosyncrasies are sometimes interesting in their own right! Finally, if you're particularly serious about minding the sensitivity of any subsequent analyses to data that aren't from exactly normal distributions, you might want to consider doing some simulation testing of those analyses too.

(Full disclosure: for this answer, I borrowed and modified some text from a previous answer of mine.)

Your interpretation of the $p$-value suggests a fundamental misunderstanding about the nature of your hypothesis test. A test cannot ever confirm that the null is true. At best, it can only state that there is insufficient evidence to suggest that the alternative hypothesis is true.

If you get a "high" $p$-value using a goodness-of-fit test or a test of normality, that doesn't mean the evidence is strong that the data are drawn from the same distribution, because the $p$-value is a conditional probability: it is the probability of observing a result as extreme as that obtained, given $H_0$ is true. So, at best, all your test has been able to show is that the data you observed does not suggest any reason to believe they are drawn from different distributions--this is not the same as saying they are in fact drawn from the same distribution.

This subtlety becomes all the more apparent when we consider that the nature of the tests you are using here tend to have very low power: that is, even if the samples are drawn from different distributions, you would need a LOT of observations for the test to affirmatively conclude that they are.

(supposing you're working with R)

When you make density plots the look like this for x and y respectively: 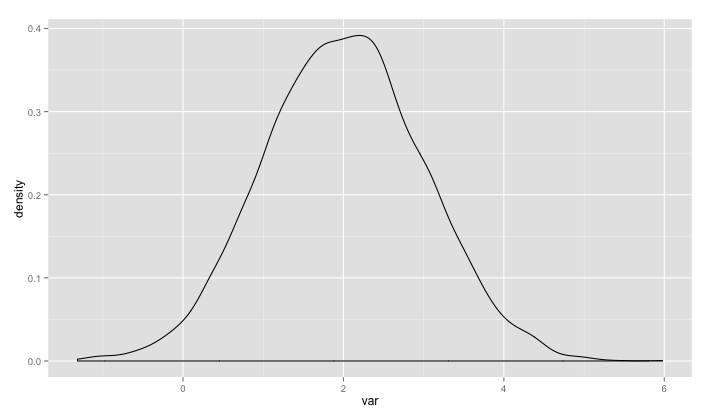 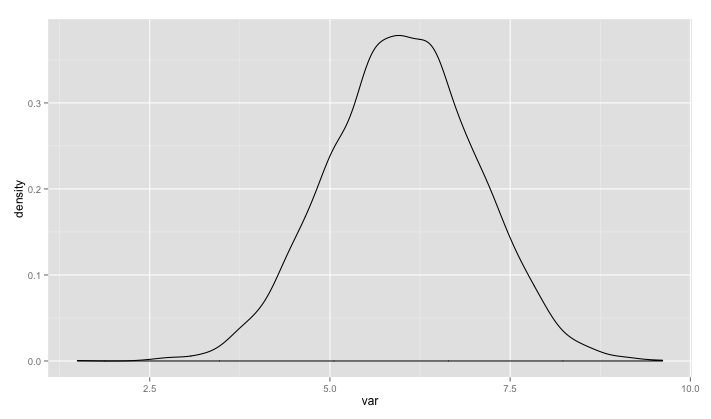 Both look rather normally distrubed. Now combine the two datasets.

When you make a density plot of z, you can see that it doesn't look like a normal distribution at all: 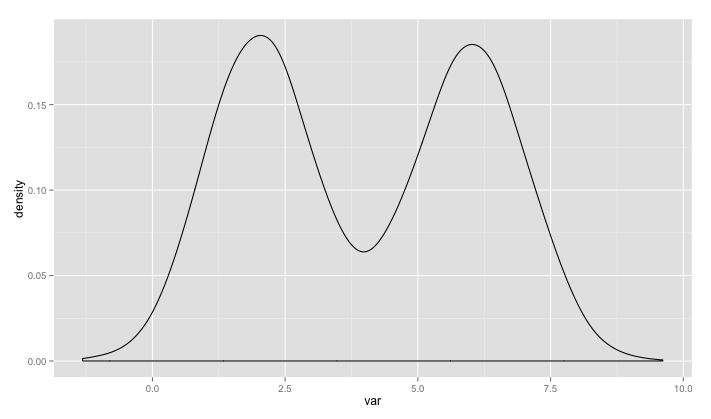 Not the answer you're looking for? Browse other questions tagged hypothesis-testing sample-size goodness-of-fit or ask your own question.

303
Is normality testing 'essentially useless'?
16
Which to believe: Kolmogorov-Smirnov test or Q-Q plot?

2
Justifying normal approximation of experimental data
8
Interpretation problems with hypothesis testing
2
Conflicting results with GoF tests
0
Is my data normal graphical vs. analytical test
3
Method to justify claim that two samples come from the same distribution
3
Fisher's combined test vs testing uniform distribution of p-values
0
Why does adding 1 to all values of this dataset change the result of Chi-square distribution test?
1
Testing if two samples have the same probability distribution