How to calculate ratings/rankings from Paired comparison / Pairwise comparison of large data-sets?

As part of my graduate thesis (area: psychology) I have gathered preference data. The data includes approximately 50000 heads-up comparison between elementX and elementX. I have a total of 15 elements. The participant would be shown 36 comparisons in random order, of which he/she would then choose the preferred element. I need to be able to calculate a meaningful "interval" scale-value for each element in order to see if the actual preferences of each element can predict theoretically generated scale values using regression analysis.

For example: ParticipantX owns element; 1,5,6,8 and 10. And would therefore only be shown comparisons that includes those elements.

Furthermore, as owning some elements were considered more rare, I made a priority list for each element, so that element1 > element2 > .... > element14

I'm afraid I destroyed the data by making this rarity order, since it resulted in some some elements being compared unequally to some elements; For example: of 1000 comparisons that element 1 was included in, 30% was with element3, 10% with element4 etc...

My questions: What method would you suggest would be the best for calculating "scale" values for each element? Currently I've calculated the basic probability that a given element has been choosen over another element. For example; element1 being chosen 95% of times to be preferred over any other element. However, I would prefer a more refined method to calculate the element values.

Thanks for your time, Chris, Finland.

Brief explanation as I guess you are not a mathematition, and I'm being nice as I'd really like a copy of your data to test my implementation of this algorithm!

Basically Bradley-Terry assigns a value to each object, which is the answer you want - e.g. if you are asking "Which of these cars looks sexier", the value would measure sexiness. Then it says if you have two cars with sexinesses $s_i$ and $s_j$, the probability of someone choosing car $i$ over car $j$ is:

That actually only depends on $s_j-s_i$ as follows: 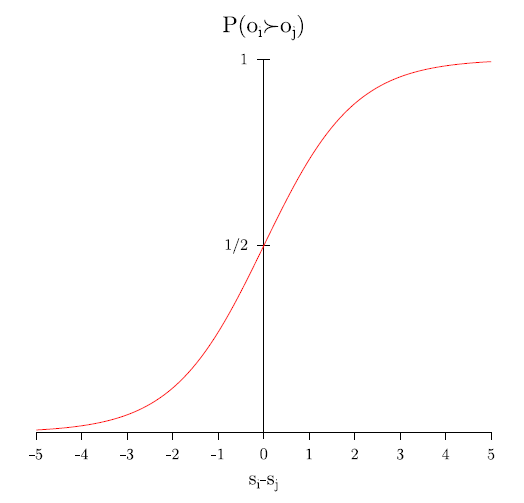 So if they have the same sexiness the chances are 50-50 (random guessing), and if one has a higher sexiness it is more likely to be chosen.

This model is mostly plucked out of the air for its plausibility and nice mathematical properties. I don't know how realistic it really is. It is widely use though.

BT then uses something called Maximum Likelihood to estimate the values of $s_i$. Put in words, it finds the sexinesses of all the cars that would make the choices that you measured ("Dave says car A is sexier than car B" etc.) as likely as possible, according to our choice model above. So if people choose car A over car B a lot, then giving $s_A$ a lower sexiness than $s_B$ would mean that their choices (A > B) are very unlikely. So those sexiness values are not a maximum likelihood estimate.

To actually find all the $s_i$'s you can use a generic optimisation method (e.g. fminsearch in matlab). Or there is an iterative algorithm that they claim is guaranteed to converge on a "unique maximum" (which I assume means global?).

That algorithm is equation 4 in the linked paper (plus normalisation).

Basically you count the number of times each object is beaten by every other. Store that in $w_{ij}$. The total number of comparisons between any two objects is $N_{ij}=w_{ij}+w_{ji}$. Define new numbers $\gamma_i=e^{s_i}$. Then start with all $\gamma_i=0$ and iteratively update, looping repeatedly through the $i$'s.

You don't need to complete a whole loop before updating each $i$. By which I mean you don't need to store old values of $\gamma_i$. As soon as a new value is calculated you can use it in subsequent updates.

You also need to normalise $\gamma$ after each loop over it:

You probably won't need this since your data set is so large and dense. In some cases you need to regularise by adding "phantom" comparisons of every object with an extra virtual one. Apparently the standard method is to count $\lambda$ wins for the real objects vs virtual, and $\lambda$ losses. I've found $\lambda$=0.1 to work fine.

Please can you send me your data and expected results if you still have it? :-)

Not the answer you're looking for? Browse other questions tagged algorithms scales ranking paired-comparisons bradley-terry-model or ask your own question.

2
Find good next pair for comparison based total ranking

1
How to summarise the ordering pattern of a set of four stimuli by participants?
11
Machine learning algorithm for ranking
2
comparison of more than two sets of rankings
4
I have 12 items to get into a single rank order. Can I get this from having a few hundred people see a set of 10 of the possible pairs of items?
4
Is there a way to estimate the minimal number of pairwise comparisons required to place complete ordering over a set of items?