Recently, this paper has received a lot of attention (e.g. from WSJ). Basically, the authors conclude that Facebook will lose 80% of its members by 2017.

They base their claims on an extrapolation of the SIR model, a compartmental model frequently used in epidemiology. Their data is drawn from Google searches for "Facebook", and the authors use the demise of Myspace to validate their conclusion.

Are the authors making a "correlation does not imply causation" mistake? This model and logic may have worked for Myspace, but is it valid for any social network?

In keeping with the scientific principle "correlation equals causation," our research unequivocally demonstrated that Princeton may be in danger of disappearing entirely.

We don’t really think Princeton or the world’s air supply is going anywhere soon. We love Princeton (and air),” and adding a final reminder that “not all research is created equal – and some methods of analysis lead to pretty crazy conclusions.

The answers so far have focused on the data itself, which makes sense with the site this is on, and the flaws about it.

But I'm a computational/mathematical epidemiologist by inclination, so I'm also going to talk about the model itself for a little bit, because it's also relevant to the discussion.

In my mind, the biggest problem with the paper is not the Google data. Mathematical models in epidemiology handle messy data all the time, and to my mind the problems with it could be addressed with a fairly straightforward sensitivity analysis.

The biggest problem, to me, is that the researchers have "doomed themselves to success" — something that should always be avoided in research. They do this in the model they decided to fit to the data: a standard SIR model.

Briefly, a SIR model (which stands for susceptible (S) infectious (I) recovered (R)) is a series of differential equations that track the health states of a population as it experiences an infectious disease. Infected individuals interact with susceptible individuals and infect them, and then in time move on to the recovered category. 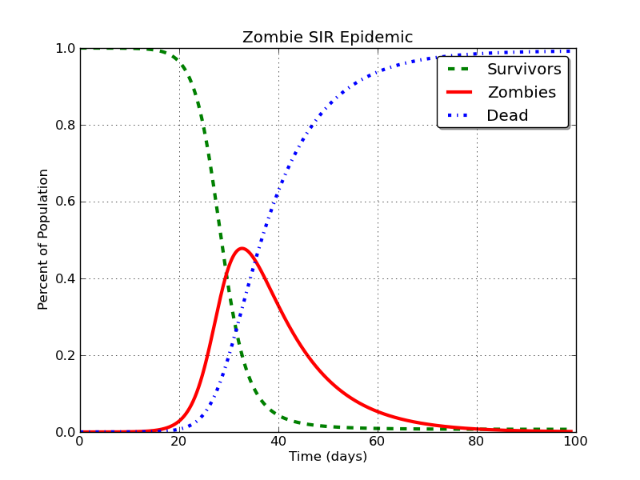 Beautiful, is it not? And yes, this one is for a zombie epidemic. Long story.

In this case, the red line is what's being modeled as "Facebook users". The problem is this:

In the basic SIR model, the I class will eventually, and inevitably, asymptotically approach zero.

It must happen. It doesn't matter if you're modeling zombies, measles, Facebook, or Stack Exchange, etc. If you model it with a SIR model, the inevitable conclusion is that the population in the infectious (I) class drops to approximately zero.

There are extremely straightforward extensions to the SIR model that make this not true — either you can have people in the recovered (R) class come back to susceptible (S) (essentially, this would be people who left Facebook changing from "I'm never going back" to "I might go back someday"), or you can have new people come into the population (this would be little Timmy and Claire getting their first computers).

Unfortunately, the authors didn't fit those models. This is, incidentally, a widespread problem in mathematical modeling. A statistical model is an attempt to describe the patterns of variables and their interactions within the data. A mathematical model is an assertion about reality. You can get a SIR model to fit lots of things, but your choice of a SIR model is also an assertion about the system. Namely, that once it peaks, it's heading to zero.

Incidentally, Internet companies do use user-retention models that look a heck of a lot like epidemic models, but they're also considerably more complex than the one presented in the paper.

My primary concern with this paper is that it focuses primarily on Google search results. It is a well-established fact that smartphone use is on the rise (Pew Internet, Brandwatch), and traditional computer sales are declining (possibly just due to old computers still functioning) (Slate, ExtremeTech), as more people use smartphones to access the internet. Considering there is a native Facebook app for (at least) iOS, Android, Blackberry, and Windows Phone, it's no surprise that the number of Google queries for "facebook" has fallen significantly. If users no longer need to open a browser and mistype "facebook.com" in the URL bar, then that would definitely negatively impact the number of searches. In fact, the number of FB users who use the app has gone up significantly (TechCrunch, Forbes).

I think this study is just some "huh, interesting correlation" that got taken too far by alarmist media outlets; "Did you know the world is changing? How unexpected!"

The problem with such type of models is that they assume that no other factors can influence the dynamics of the observed variable. This assumption is hard to justify when dealing with data related to people. For example, this model assumes that Facebook cannot do anything to counter the loss of its users, which is a very questionable assumption to make.

Google Trend in my opinion can't produce a good data set for this case of study. Google trend shows how often a term is searched with Google so there are at least two reasons for raising some doubts about the prevision:

Facebook is not only a site is a phenomenon, with many articles, books and a film about it and Facebook Inc. on May 18, 2012 began selling stock to the public and trading on the NASDAQ. Google Trend shows you both: the searches for the site and the searches for the "phenomenon". New things always have a great impact to the mass, TV had a great impact to the mass now no one write articles about it but is still one of the most used appliance.

With mobile applications and Bookmarks a user with a decent knowledge of internet search "facebook" on Google only the first time then he usually saves the page as a bookmark or download the application. The graph below is the Google trend for Wikipedia, it seems that we will not use Wikipedia in the future. Obviously this is not true we simply don't access to wikipedia typing "wikipedia" we simply search and then use the wikipedia page or we use the bookmark to access to it.

A few basic issues stand out with this paper:

That all said, I think it has some very valid and engaging ideas and is likely to spur much further research. It's groundbreaking, pioneering, and it just needs to be adjusted a bit in its claims. I am delighted in this use of Stack Exchange and collaborative wisdom/collective intelligence analyzing this paper. (Now if only reporters researching the subject would read this whole page carefully before preparing their simplistic sound bites.)

That it will end is already guaranteed. http://www.ted.com/talks/geoffrey_west_the_surprising_math_of_cities_and_corporations.html

I take umbrage with the use of the SIR model. It comes with assumptions.

One of the assumptions is that eventually everyone is "recovered". Infections are not perpetual, while technology adoption can be (consider the automobile for example).

If the business is doomed to eventually die, then when going through death throes the relationships between susceptible, infected, and recovered might be adequately modeled by a particular SIR model. This does not mean the model is descriptive of any of the seasons before end-of-life. It does not take into account other forces - the context. Facebook was part of the context of end of "Myspace" and so while an SIR was appropriate for Myspace-only use, it was not for Social-Network use because many users had accounts on both, and switched to FB-dominant usage.

I dug through the zombie-model, and even through some non-zombie SIR fits, and a time and population punctuated-windowed SIR is more appropriate there. It is not a universal model, and it has strengths and weaknesses. That means that the SIR is imperfect even for the systems that it was engineered to model. Such fundamental imperfection for its target suggests that without careful use, application outside the target area can be, ceteris paribus, more problematic than other model.

To answer your question

Probably not. Historical data can only predict future events if the 'environment' is similar. This paper assumes that the total of Google users and queries is a constant, which of course it is not. Now this article may say more about Google than about Facebook.

However, based on the rapid rise and fall of many other social networks like MySpace and others I think one can safely assume that there is a big chance Facebook will no longer be the dominant social network in 5 years.

If we take a look at the map of social networks, there are some cases that epidemic model applies.

The article could have some other examples (Friendster and Orkut are a good example of massive declination of its users) and also taking into account the fact that normally people migrate to other social network that offers better or new services.

Facebook inovates the way people comunicate. Comparing with Orkut, an user needed to enter another person profile to see their updates. On the other hand on facebook the feeds are now on his own timeline. That's a major change.

IMHO, people don't leave Social Network. They migrate, based on a better service, functionality or experience.

The question is: Will there be a better Social Network ? Maybe Google +.

Not the answer you're looking for? Browse other questions tagged hypothesis-testing correlation epidemiology social-network or ask your own question.

6
Given the advancements in statistical testing, can estimating correlations be an end in itself?
3
How would Facebook measure an AB test whose experimental condition affects the control and experimental groups?
0
Do I subtract end-of-year deaths from total population? (prevalence and incidence)
4
Estimating the effect of different histories of exposure, on a scalar response measured at the end of a study