My biologist friend is having a bad time with her experiment. It's suspected that changing the temperature and organic content in water may affect the growth of crustaceans. In her experiment, two formulations of different organic content combined with four different temperatures (plus control) were combined. 10 tiny crustaceans were put to grow in each combination and weighed weeks later. However, the crustaceans are too small to be weighed individually, so they were all weighed together and the result divided by 10. The experiment generated the following table:

Now she'd like to find out whether any combination of Temperature x Formulation affects the crustaceans' weight considerably compared to the control groups. In my opinion, the best way to detect whether the Temperatures or Fractions affect the group's weight is via two-way ANOVA without replication, which gives the following:

But I have a few questions: how reliable such statistic would be? Is this really the correct way to detect the effect of each combination in each group (in this case, that there's no effect whatsoever)?

Or would it be necessary to re-run the experiment with replication for a proper result? In this case, it's gonna be difficult since these crustaceans are quite expensive.

It is very unfortunate that individual animals could not have been weighed. By weighing them together, your friend obtained 10 times less data, and there is simply not enough data for any meaningful conclusion. ANOVA reports no significant effect, but it is absolutely possible that there were all kind of effects that ANOVA simply cannot detect with this amount of data.

I don't think one needs ANOVA to arrive to this conclusion, you can simply look at the data: 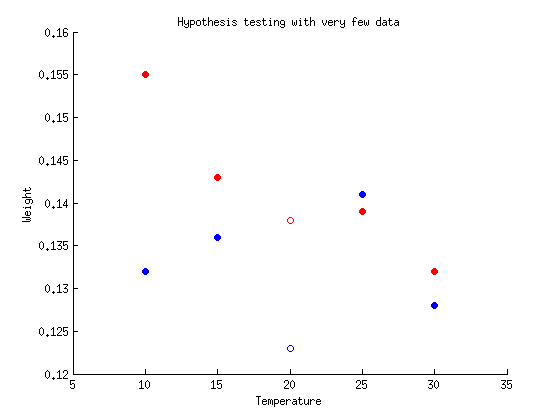 Blue is Formulation 1, red is 2, open circles are controls. I think it is quite evident that no conclusions can be drawn. Remember that having only these 10 numbers we have no way to know how variable the crustaceans' weight was in each group. If this unknown variance was very large, this whole scatter-plot can be noise. If it was very small, then there are some complicated dependencies between growth, temperature and formulation. Alas, there is no way to know.

Not the answer you're looking for? Browse other questions tagged hypothesis-testing anova biostatistics or ask your own question.