Whether distributions with the same moments are identical

Let me answer in reverse order:

see here and here for example

* for certain values of 'same', due to that phrase 'almost everywhere'

Kendall and Stuart list a continuous distribution family (possibly originally due to Stieltjes or someone of that vintage, but my recollection is unclear, it's been a few decades) that have identical moment sequences and yet are different.

The book by Romano and Siegel (Counterexamples in Probability and Statistics) lists counterexamples in section 3.14 and 3.15 (pages 48-49). (Actually, looking at them, I think both of those were in Kendall and Stuart.)

That second example involves the family of densities

The densities differ as $\alpha$ changes, but the moment sequences are the same.

and then showing that the second part contributes 0 to each moment, so they are all the same as the moments of the first part.

Here's what two of the densities look like. The blue is the case at the left limit ($\alpha=0$), the green is the case with $\alpha=0.5$. The right-side graph is the same but with log-log scales on the axes.

Better still, perhaps, to have taken a much bigger range and used a fourth-root scale on the x-axis, making the blue curve straight, and the green one move like a sin curve above and below it, something like so: 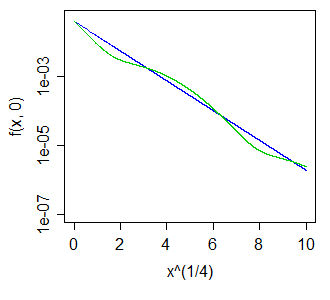 The wiggles above and below the blue curve - whether of larger or smaller magnitude - turn out to leave all positive integer moments unaltered.

Note that this also means we can get a distribution all of whose odd moments are zero, but which is asymmetric, by choosing $X_1,X_2$ with different $\alpha$ and taking a 50-50 mix of $X_1$, and $-X_2$. The result must have all odd moments cancel, but the two halves aren't the same.

Not the answer you're looking for? Browse other questions tagged distributions lognormal-distribution moments moment-generating-function or ask your own question.

31
Does mean=mode imply a symmetric distribution?
23
Does mean = median imply that a unimodal distribution is symmetric?
42
Existence of the moment generating function and variance
28
Proof that moment generating functions uniquely determine probability distributions
19
How is the kurtosis of a distribution related to the geometry of the density function?
6
What is the famous data set that looks totally different but has similar summary stats?
16
Identity of moment-generating functions
12
How to fit an approximate PDF (i.e.: density estimation) using the first k (empirical) moments?
4
Estimate probability of event using moments of a distribution or a Taylor expansion involving the moments
5
median and mean of the sample mean of i.i.d. log-normal
See more linked questions